Shaping, Sharing, Growing — 2011–2012 by the Numbers — The year in Fundraising — When Wikipedia went dark for a day — Our key Media Stories — Wikimedia gets GLAM — Building a Legacy: Our work in Education — Monmouthpedia: A case study in innovation — Evaluation Summary from Ting Chen, Chair, Wikimedia Foundation 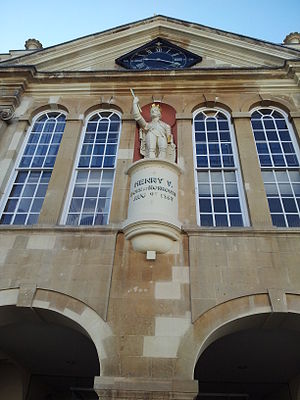 The statue of Henry V outside the Shire Hall, Monmouth.

What do you get when you bring together a community of Wikipedians, an engaged local council, a town with a rich cultural heritage, motivated volunteers, and a creative use of new technology? You get MonmouthpediA – a project to create the world's first Wikipedia town in Monmouth, Wales.

The project aims to cover every single notable place, people, artefacts, flora, fauna and other things in Monmouth in as many languages as possible, but with a special focus on Welsh. This is a different scale of WikiProject. Monmouthshire County Council is working to install free town-wide Wi-Fi for this project.

MonmouthpediA uses QRpedia codes, a type of bar code a smartphone can read through its camera that takes you to a Wikipedia article in your language. QR codes are extremely useful, as physical signs have no way of displaying the same amount of information and in a potentially huge number of languages as Wikipedia can.

Articles will have coordinates (geotags) to allow a virtual tour of the town using Wikipedia's mobile apps (or the Wikipedia layer on OpenStreetMap or Google Streetview) and will be available in augmented reality software including Layar.

At the time of writing, the project has resulted in over 300 new articles in 26 languages, 145 improved articles, over 1000 images, 23 Did You Know? mentions and an extra 400,000 views of Monmouth-related content per year.

Why not pay a visit to Monmouth to take a look for yourself? You could even consider making your home town the next Wikipedia town...