From Wikimedia UK
< 2016 AGM
Jump to navigation Jump to search

The Walker building is a grade II listed former factory, nestling in the shadow of the former GWR main line to London (now used by local services, and Chiltern line trains to Marylebone). It is in the Digbeth conservation zone.

The building was previously home to Thomas Walker & Son, who made marine instruments.

From Birmingham City Centre in general, follow the directions for New Street Station, below.

From New Street Station: The station has been massively restructured in the last year or so. If you have not visited for a while, you will not recognise it! Leave via the exit marked "Bullring". Head for St Martin's church, in the Bull Ring. After passing between the church and Selfridges (see picture), continue downhill, along the street called Digbeth (eventually walking on the left side) until you are opposite Digbeth Coach Station. Turn left into Oxford Street. The venue is on your left, just before the railway viaduct.

From Moor Street Station turn left at the exit, then immediately left again to descend a steep hill, to Park Street. Turn right into Park Street (by first crossing at the lights under the railway viaduct), then left into Digbeth, then follow directions from New Street.

No buses pass the venue, but some local routes serve Digbeth Coach Station (52.47550,-1.88825), which is nearby. The Coach Station is also where you may arrive if using National Express coaches.

There is secure cycle parking inside the gates of the venue.

Some free on-street parking is available outside the venue. This often fills up early. 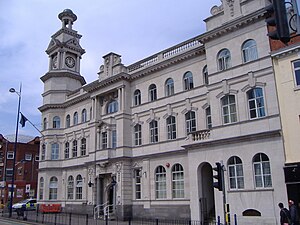 Items of interest you may pass on your way from the city centre include:

If you are early, you may also wish to view:

each of which is a little further along Digbeth 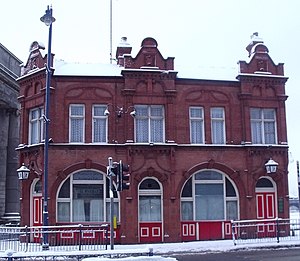 The Woodman, after snow!

After the AGM, some of us will visit The Woodman (52.481751,-1.886858) for refreshments. Located outside Millennium Point and opposite Curzon Street railway station, the recently-restored, Grade II listed pub is convenient for the city centre and its main railway stations.