A number of cultural institutes have made digital images of works in their collections, or textual information about these works, available on Wikimedia websites. This page outlines some of the past partnerships, and some of the benefits (and also the drawbacks) of such partnerships for the owners of the works.

A wide range of institutions have also made their works freely available on the internet in the public domain, or by a Creative Commons license. This means that the works can be freely reused by all, including Wikimedia projects.

The benefits of making your works freely available include:

There are also some potential drawbacks, which may or may not present problems:

In December 2008, nearly 100,000 images from the German Federal Archives (Bundesarchiv) were uploaded to Wikimedia Commons. The images were mostly related to the history of Germany (including the German Democratic Republic) and were part of a cooperation between Wikimedia Germany and the Federal Archives. The images have since been extensively categorized on Wikimedia Commons, and integrated into Wikipedia articles.

As a result of making these images available on Wikipedia, they greatly increased the click-through rate to their website from Wikipedia, with the result that their revenue from poster sales substantially increased. They also received a large number of corrections to the image descriptions and additions to metadata from Wikimedia volunteers. They subsequently decided to hire a full time employee solely for integrating these corrections and additions into their archive.[1]

In March 2009, the first German library, the Land Library of Saxony - State and University Library Dresden (SLUB) made around 250,000 image files from its repository available via Wikimedia Commons under a Creative Commons license. 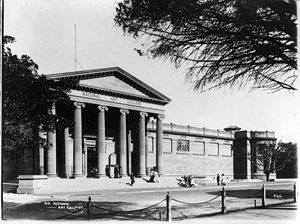 The Art Gallery of New South Wales circa 1900, made available thanks to the PowerHouse Museum

The Powerhouse Museum in Australia released descriptions of its items under Creative Commons licenses. Whilst not "donated" to Wikimedia, releasing the content under a Creative Commons license means that it can easily be incorporated into Wikipedia articles. They have also made a number of public domain images available via Flickr (also see the PowerHouse Museum page on Flickr images), which can be used on Wikipedia.

Excavation at Uriconium, Shopshire, by Francis Bedford. Released by the Regionarkivet. Digitally restored by a Wikimedia volunteer.

On 19 August 2009, Regionarkivet (a municipal archive institution based in Gothenburg, Sweden) and Wikimedia Sverige announced the release of 28 high-quality and high-resolution images onto Wikimedia Commons. These photographs, all of which are in the public domain due to their age, were taken by some of the most influential photographers of the 19th century. Amongst the pictures are some taken within the UK by the British architect and photographer Francis Bedford, and the pioneering British photographer Roger Fenton.

Each situation is unique, so the best approach is to talk to a local chapter (in the UK, that's us) by email, phone or in person. See our contact details for more information.

In terms of technically making content available on Wikipedia, it is possible to provide media files, complete with metadata as desired, to a Wikimedia chapter, who can then upload the media files to Wikimedia Commons. Alternatively, licensing on the institutions' webpages can be changed to release content on there under a Creative Commons license