Wikimedians once again came out in force for the Wiki Loves Monuments photographic competition. The ten images which Wiki Loves Monuments UK have selected for the final round of the competition can be viewed here, along with the two winners of the best image of a building on an ‘At Risk’ register prize. That link will also give you access to the other 390 pictures from 39 other participating countries which have submitted finalists for this years competition. An international panel of jurists will assess the photographs according to three criteria:

The international results will be published shortly.

The WLM awards ceremony and community Xmas party 2014 was held on Thursday 18th December this year in the basement of Development House, London, home of the Wikimedia UK Office.

Are you going to take part in next year's competition?

On 4th November 2014 the Open Data Institute announced the winners of their first ever Open Data Awards. Wikidata were the winners of the Open Data Publisher Award - "celebrating high publishing standards and use of challenging data". This recognition comes as Wikidata is becoming increasingly important in the emerging world of open data. As Kathryn Corrick, Head of Content & Learning at the ODI, remarked, it was a truly international competition. The emerging community of Wikidatans in the UK benefited from Magnus Manske's knowledge when he volunteered to lead a Wikidata training session for Wikimedia UK on 11th October 2014. He was supported by Charles Matthews and Navino Evans of Histropedia. There are already two e-mail lists for Wikidata (General and Tech) which focus more on technical issues. However we now have a UK based list which focuses on organising Wikidata activities such as Wikidata Meetups and datathons. The first London Wikidata Meetup was 5th November with another planned for the New Year on 7th January. Currently we are having discussions on list around how to organise datathons, with particular reference to holding one in Manchester in 2015. If you wish to get involved, please join those mailing lists which would be useful to you. If you can make it to London, it would be great to see you at a Wikidatan Meetup, but if you are based further a field, let's discuss how we can organise a meetup in your area on the UK based list.

John Cummings facilitating a session at the Volunteer Strategy Gathering

Wikimedia UK is going through a period of review and reflection. The Volunteer Strategy Gathering is one initiative to ensure that volunteers remain at the heart of that rethink

This one-day event attracted over thirty participants, including staff and trustees. Several topical issues facing the charity were addressed: the reduction in funding from the Funds Dissemination Committee, the resignation of Jon Davies, our former CEO, and how volunteers can play a central part as we develop new funding strategies. After Carol Campbell had welcomed everyone and introduced our new Interim CEO, D'Arcy Myers (see below) we discussed the different sorts of experience people gain from contributing as an activist to the Wikimedian community, and more regulated volunteering for Wikimedia UK activities such as the recent Science Museum Late. (See Community and WMUK Roles for a summary of this.) Jon Cummings then took us through an exercises which helped us understand the demographics of the people present and discuss both our personal aspirations as members of the community as well as where we would like Wikimedia UK to go as a whole in the near and mid-term future. In the afternoon Raya Sharbain and Natalie Chan made a thought provoking presentation on the issue of Gender Gap. Then Katherine Bavage took us through some of the background financial changes and how they will impact on our volunteering strategy. One key issue is how do we keep having volunteers playing a leading role as our emphasis moves more towards project-based funding. This was followed by a more general discussion in the final part of the afternoon.

A second Volunteer Strategy Gathering has been scheduled for Saturday 28th February. If you would like to attend, reasonable travel expenses and care costs for dependents may be paid by Wikimedia UK

For some time London's Science Museum has been organising a number of "Lates" - a night of free adults-only information and entertainment that takes place on the last Wednesday of the month. After visits to check out the September and October Lates, Wikimedia UK worked with the Museum for the November Late, which was themed around their new gallery, the Information Age. This event depended heavily on volunteers - dozens turned out on the night, both stalwarts and newcomers, coming from as far afield as Brighton and Bristol, and much of the office-based planning was done by Mary Langsdale, who played a pivotal role in organising Wikimedia UK's involvement in the evening.

There were six activities Wikimedians offered to Late visitors:

With over 3,800 visitors, this event provided an invaluable opportunity to engage with members of the public who already had indicated an interest in science by attending the event

Key moment during the Battle of Waterloo, 18th June 1815

There is now a list on the Wikimedia UK wiki entitled Anniversary list where we have started to note the anniversaries coming up in 2015. Sometimes we can predict when an article is going to be in the news, and as we learned with 2014's Battle of Clontarf, getting a group of articles up to scratch in advance of an anniversary is a great way to keep Wikipedia ahead of the curve. It can also be something that engages with experts. There are of course far more anniversaries than we have capacity to hold editathons, but there are other ways to plan improvement of articles, including buying reference books for editors keen to work on particular anniversary events. So we'd like to use this page to discuss what the forthcoming anniversaries are that people are interested in working on, and what hot topics we are likely to see in 2015 and explore what the interest level is.

Follow the link at the bottom of the page, 1915 publications, creations, foundations, discoveries, or events, to Autolist 2 and you can see how you can access information from Wikidata. Some of the items have no English description, so you can always become a Wikidatan by adding the info! 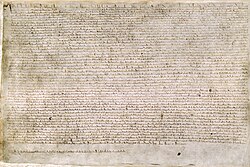 (Using material from From The Signpost)

One Anniversary in question that comes up this year is the signing of Magna Carta on June 15, 1215. This is seen as an iconic event in the history of civil rights and liberties. The British Library will open an exhibition next May to commemorate that document's 800th anniversary. As part of that exhibition, the Ruskin School of Art has commissioned artist Cornelia Parker to create Magna Carta (An Embroidery), a 13-metre long embroidered recreation of the entire Wikipedia article on the Magna Carta as it appeared this June on the document's 799th anniversary.

"This is a snapshot of where the debate about Magna Carta is right now. Echoing the communal activity that resulted in the Bayeux Tapestry, but on this occasion placing more emphasis on the word rather than the image, I want to create an artwork that is a contemporary interpretation of Magna Carta."

I am delighted to be acting as Interim CEO for Wikimedia UK. I have been in the voluntary sector for a couple of decades and have often been impressed with how dedicated people are, whether they be volunteers, staff or Trustees. In the short time I have been here I have been inspired by everyone's dedication. I hope as interim CEO the be able to support and guide you through this transition. I think Wikimedia UK is at an exciting time and building on the successes so far we can achieve even more. It is the intention that I will be with the organisation for about six months, during that time the board will be canvasing opinion on what the organisation is looking for in its next CEO and then will be undertaking the recruitment process.