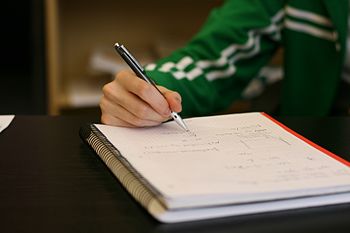 We offer grants to our members to help them in their volunteering in Wikimedia or wider projects to promote open knowledge. If you're not yet a member and would like to apply for a grant, it costs just £5 and you can join online.

Following the volunteer strategy gathering in July, we have looked at our process for applying for simple grants or funding & assistance in greater projects.

We did a simple exercise at the event, asking attendees to go through the application we had started to amend, and the feedback taken at the event has been useful in terms of amending the process.

The response was mixed, some were happy that it made them think about potential and some of the processes in detail, some found it was too granular, but no one found it too long or onerous.

In response we’ve enabled applicants to apply with a wiki, or using a Google form. And while we can’t avoid a certain amount of bureaucracy in an application process, we have tried to minimise it. Applications for funds or support should be a conversation, as we need to know what our volunteers want to do, and we want to be able to match up volunteers with other volunteers or institutions if these things align.

With an expanded programme team of three full time staff, we will be able to respond more quickly to small requests for grants, and we have started expanding the existing Grants Committee to provide a thorough evaluation of more ambitious projects.

So, with this in place, we’d like to get the ball rolling and start supporting editing or photography projects or more as soon as possible really. If there’s a book, or a train ticket, the price of admission, or some more significant financial support that would help you start or complete some work on a Wikimedia project, we would be very happy to hear from you. And if you know anyone else who might be interested, let them know! Help us spread the word.

Do you have an idea Wikimedia UK can help with? Use the buttons below to apply for a grant.

In focus: photography supported by the charity

If project grants have got you thinking, here's a great example of how one volunteer has used them.

My name is David Iliff, but I'm probably better known in the Wiki community as Diliff. I've been a contributor to Wikipedia and to Commons for over 10 years, primarily in the form of photography. I've been fortunate enough in that time to travel and photograph some of the world's great cityscapes, monuments and landscapes and in that time, 223 of my photos have been designated Featured Pictures on the English Wikipedia, and 209 on Wikimedia Commons. I've also been fortunate enough combine my passion for photography with the financial assistance from Wikimedia UK to develop some of my project ideas.

Over the previous 12–18 months, I have begun to focus more on interior architectural photography – particularly of historic and interesting churches, because it is an ideal (but fairly unorthodox) use of panoramic stitching alongside HDR (high dynamic range) processing techniques. It is, however, time consuming! Each individual image can consist of over 100 individual photos taken at various exposures and in various sections of the scene. Each image can take up to 10 or 15 minutes to photograph. However, the resulting images are very high resolution and contain the full range of luminosity present in the scene, which is something that single exposures often fail to achieve.

In 2014, I began to hatch a plan to photograph as many of the fantastic cathedrals of the UK as I could. I realised that I would be able to put together a route that would cover a great many of them, but it would not be a cheap enterprise. Many of the cathedrals charge an entry fee, and the mere cost of travelling to them would soon add up. I became aware of Wikimedia UK's grant system, and after reviewing previous grants, I felt that it would be a worthy project to invest in. After putting together a plan, a breakdown of estimated financial costs which would cover the cost of fuel, entry fees and parking tickets, and an explanation about how the project would benefit WMF's projects and Wikimedia UK's strategic goals, I was lucky enough to get approval.

In June and July 2014, I executed the plan; my project comprised of two 5-day road trips in a borrowed campervan covering Eastern and Western England separately. I managed to visit and photograph the interiors of 34 cathedrals and churches including a one-day stopover in Cambridge to photograph the college chapels along the way. The project generated 34 English Wikipedia Featured Pictures and 29 Wikimedia Commons Featured Pictures, and significantly improved the photographic illustrations of the articles.

In February 2015, I hatched another (smaller) plan to photograph the interior of the Bodleian Library after receiving special permission to photograph rooms that were normally completely off limit to photograph for regular visitors. As part of the trip and to increase the photographic value of the trip, I also planned to photograph the numerous Oxford University college chapels and grounds. With a considerably smaller budget covering the cost of 2 nights’ accommodation in a hostel and a train trip from London, this was approved by the grant committee. This project resulted in 10 Wikimedia Commons Featured Pictures and again, a big improvement in the photographic illustration of the various Wikipedia articles, particularly the Bodleian Library which is now illustrated by high quality architectural images of the interiors of Duke Humfrey’s Library, the Divinity School and Convocation House – something which likely would have otherwise been impossible without a relationship between Wikimedia UK and the financial assistance I received.

Finally, this summer, after visiting the Wimbledon Championships in 2013 and getting some good photos there, I applied for a small grant to cover the cost of entry to the Queens Club and Wimbledon for the 2015 tournaments. I also attended the Surbiton challenger tournament and the four day Wimbledon qualification tournament (which were both free) in the week prior to Wimbledon and managed to shoot a huge volume of photos – about 6000 photos in total! After spending considerable time narrowing down to the best shots – probably more time than was spent shooting! – I ended up with around 1200 'keepers' covering a total of nearly 250 male and female professional tennis players. Almost every player I photographed now has an article illustrated by one of the images I took during the project. Key numbers:

I believe that all three projects were successes by various measures and I’m quite proud of what has been achieved with the financial assistance of Wikimedia UK’s grant program toward the continued improvement of our freely available content on Wikipedia.

You can find more of David's outstanding photographs on Wikipedia and Wikimedia Commons.

Jason Evans looks back at a recent event with a new twist.

It has been 9 months since I took up the post of Wikipedian in Residence at the National Library of Wales and in that time we have held a number of successful edit-a-thons on a variety of subjects from Photography and WWI to Women Scientists. On Monday the 7th of September we did something very different. The theme of this edit-a-thon was Rugby, and just weeks away from a World Cup on home turf it seemed the perfect topic. It was held at the Millennium Stadium in Cardiff, often regarded as the greatest rugby arena of all time. I am very grateful to the Welsh Rugby Union who kindly gave us the use of their Media Centre and the Press area of the stands, overlooking the famous pitch.

The aim of the event was simple – improve Wikipedia content relating to rugby in both English and Welsh. We focused on players past and present, historic clubs and arenas. Before we could get editing we had the important task of drinking coffee and eating cookies! And after a brief introduction and a quick lesson in editing for the first timers, we were given an excellent talk by Cardiff's very own rugby author and historian Gwyn Prescott on the origins of the modern game.

We made use of the huge selection of rugby related books held by the National Library of Wales, along with reliable online resources (and Gwyn Prescott) as we got to work editing and creating new articles. The team worked together to make some very welcome improvements. A Welsh-language article was created for the Webb Ellis Cup, and several editors worked together to improve English and Welsh versions of the same articles. In all 14 articles were improved and 8 completely new articles were added to the Welsh Wikipedia including biographies of players past and present.

In the afternoon we left the buzz of the media centre and took our seats in the stands overlooking the pitch, where we continued to improve Wiki content, whilst in front of us contractors tested smoke machines and hoisted rows of swirling lights high above our heads, as the stadium prepared for a big event the following day.

Many of the new editors gravitated towards the visual editor and several also made use of another Beta feature, in the ‘Translate this page’ tool on the Welsh Wiki. Several new editors, including Gwynn Prescott and Lila (aged 10) were very enthusiastic about continuing to contribute to Wikipedia in the future, which was great to hear. A few days later the BBC took an interest and I got the chance to speak about the event, and the virtues of Wikipedia, on BBC Radio Cymru.

It was inspiring to work on an Edit-a-thon in such pertinent and impressive surroundings. It's a format I would love to try again in the future, and one I would recommend to others.

You can read more about our partnerships with other organisations here and if you want to find an editing event near you go to our events page. 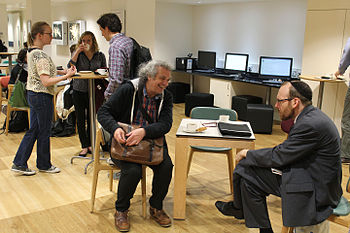 The Wikipedia Science Conference took place in London this month, and brought together scientists, Wikipedians, science communicators, programmers and others for a two-day discussion about those areas where Wikipedia and science overlap. There were talks about getting scientists to help edit Wikipedia, about the extent of the scientific information available on Wikipedia, and how we can link Wikipedia with scientific databases. We were introduced to the concept of "Wikimedians in Residence", who spent 6 months part-time working with various scholarly organisations.

Many of the topics – related to content mining, linking databases, licensing of images, DOIs, ORCID, peer review, and open science – were of particular interest to F1000Research, but my personal favourite talk was the talk by Andy Mabbett (Wikimedian in Residence at the Royal Society of Chemistry and ORCID) who gave very practical tips for scientists who have little time and want to help improve content on Wikipedia and other Wikimedia sites. A few of his tips were:

A lot of the other talks addressed the need for more scientists to contribute to Wikipedia, but these were practical tips that someone could get started with right away – and many did, during the unconference section of the meeting.

I collected many tweets about the talks on Storify, where you can find discussion of talks from Day 1 and Day 2.

Wikimeets are informal, in-person social meetings of Wikimedians. They have been held in a number of different UK cities since 2004. One of our volunteers is running a survey to find out what can be done to make wikimeets more appealing and accessible, and to identify what the best ways are to notify potential attendees about upcoming wikimeets. Please take a moment to fill in the survey.