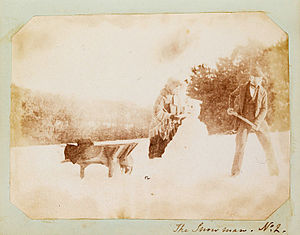 The world's first photograph of a snowman, courtesy of the National Library of Wales

I hope you enjoy this edition of the Wikimedia UK newsletter. I wanted to take this opportunity to briefly introduce myself and to reflect on my first two months in post as the new Chief Executive of Wikimedia UK. In that time, I have visited a number of cultural institutions that we are working with, such as the Bodleian Libraries, the National Archives and the Wellcome Library, and spoken to a wide range of people involved with the charity as volunteers, partners, staff, trustees, members, as well as our international colleagues within the wider Wikimedia movement. I have been continually struck by people’s passion for open knowledge and their excitement about the huge potential represented by Wikimedia projects, particularly in terms of sharing and enabling access to our common cultural heritage here in the UK.

I know that some of you will have attended one or more of our volunteer strategy gatherings over the past year, and may be keen to find out more about how you can be involved with the organisation; whether you’re a long-established editor on wikipedia, an experienced trainer, a former member of one of our committees or an aspiring event manager. The programmes team and I have taken on board the feedback from these meetings and have simplified our committee structure and our project delivery model, and the team has been identifying different volunteer roles within the organisation, to make these opportunities clearer. I’m also keen to hear from people within the Wikimedia UK community with your perspective and ideas, and will be launching an open strategy consultation in the new year so that you can feed into our plans for 2016 onwards.

In the meantime, I would like to wish everyone who celebrates Christmas a wonderful festive season, and a happy new year to you all.

When browsing Wikipedia you can come across articles as detailed as the one about Exmoor or as short as the entry on the River Broadwater in Berkshire. The Stub Contest is about taking the shortest articles on Wikipedia, called ‘stubs’, and rewriting them.

Cas Liber revived the contest in 2013 after a nine-year hiatus. He organises the competition while Wikimedia UK provides the prizes. To give you an idea of how much work goes into making the Stub Contest happen, for the 2015 edition 36 people submitted nearly 3,000 articles. Each one is given a score for the competition, with extra points for articles more than ten years old and those which are particularly important. It has been a very effective way of getting people to spend some time on areas of Wikipedia’s content that is most in need improvement.

‘Sturmvogel_66’ won the overall prize, while ‘Thine Antique Pen’ expanded the oldest article. The oldest article entered is about the phrase “hold come what may” which was started in 2001, the year Wikipedia was founded. A full list of the articles submitted to the contest is available on Wikipedia. At almost 3,000 entries that’s a lot of writing! Well done to everyone who took part.

Cas has also used WMUK’s projects grants to support the Core Contest and the Take the Lead! competition. Take the Lead! runs in January 2016. Sign up and get ready to edit.

12th December 2015 would have been Frank Sinatra’s 100th birthday. In September, Wikipedia editor ‘Dr. Blofeld’ came to Wikimedia UK asking for support rewriting Sinatra’s article in time for his birthday. If we could help him secure the books he needed, he would prepare the article. Writing about a man whose career spanned seven decades and who sold 150 million records would be a huge undertaking under most circumstances. Trying to get it ready in about 12 weeks made it even trickier.

In a way it started back in March 2014. Dr. Blofeld applied for a grant from Wikimedia UK to write about Stanley Kubrick, Meryl Streep, and the London Ritz (amongst other subjects). From there he produced article after article on cultural icons of the 20th century. That project concluded in August, and with Sinatra’s 100th birthday on the horizon it was the next logical step.

The intention was originally to focus on Sinatra’s biography, but some subjects have a way of drawing you in. Since the re-write started it has grown into an idea to have a ‘Frank Sinatra Day’ on 12th December by having almost 20 articles related to the famous singer appear on Wikipedia’s front page.

Sinatra never learned to read music, and learnt to sing entirely by ear, which is all the more remarkable since he had a perforated eardrum from infancy. Though Sinatra is perhaps best known as a singer, with nine Grammy wins to his name, he was also a very successful actor and in 1953 he won the Academy Award for Best Supporting Actor for his role in From Here to Eternity. He even found a niche in the 1960s playing hard-boiled detectives in neo-noir films. A few of Sinatra’s films are in the public domain, and you can watch thriller Suddenly on Wikimedia Commons as it is now in the public domain.

As Sinatra’s 100th birthday approaches more and more people will turn to Wikipedia to learn more about his life, works, and who he was. The work of volunteers like Dr. Blofeld is therefore invaluable. Already the article is now scrupulously researched, with 586 references to 119 sources – a record for Dr. Blofeld and now one of the best articles in the encyclopedia. He is now working on Maureen O’Hara’s article, beginning the process of rewriting it in late October on the news she had passed away. The article has been utterly transformed and is five times longer than it was before. Next up: Cary Grant.

Got an idea to project grant improve Wikipedia?

In focus: media supported by the charity[edit | edit source]

In the last edition of the newsletter we mentioned September's Wikipedia Science Conference, run in partnership with the Wellcome Trust and the Royal Society of Chemistry. For two days scientists and Wikimedians came together to share skills, ideals, and tools relating to the intersection of STEM subjects and Wikimedia Projects. Wikipedia, Wikidata, and Wikimedia Commons are platforms for disseminating scientific information to a huge audience and Wikimedia UK is helping organisations like Cancer Research UK to share their knowledge and understanding.

This video was prepared by 'Rock drum' who has produced some excellent videos for Wikimedia UK, including a documentary about our work with Galleries, Libraries, Archives and Museums. 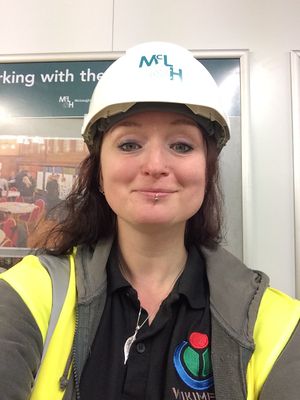 Sara Thomas looks back on her residency with Museum Galleries Scotland

It’s the first of December in a cold and rainy Glasgow. I note, with no small degree of sadness, that the onset of Proper Scottish Winter means that my 12-month residency with Museums Galleries Scotland is fast coming to a close. In the past 11 months I’ve been involved with a wide range of museums and other cultural institutions, met some wonderful people, spoken to over 400 cultural sector staff, and trained around 150 new editors.

As a networked residency, I’ve been working across the country, starting with four months at Glasgow Museums, and then opening out to the rest of the Scottish sector, and occasionally beyond. I’ve wandered around packed museum stores, helped upload pictures of 18th-century graffiti, been inside a pipe organ, climbed on the roof of a museum looking down the River Clyde, and seen the excitement on numerous faces as they publish their first ever article. That last one is a particular highlight.

Since the four month secondment to Glasgow Museums concluded, I’ve been working out of Museums Galleries Scotland’s Edinburgh offices, using their networks as a way into the sector. In practice, that means travelling to speak to museum forum groups across Scotland, organising an event for interested organisations to find out more about working with Wiki, training MGS staff to edit so that they can advocate for my work in the course of their own, developing relationships with various individual museums to support them to do more work with Wiki, and delivering plenty of training sessions...

In contrast to other residencies, my work this year has had more focus on raising awareness about, and advocating strongly for, open knowledge in a museums context. A glance at the Events & Workshops tab of my project page shows that the seeds that were sown all summer are flowering, and in many ways I feel like I’m only just getting started. The sector has a great deal of enthusiasm for the project, and many individuals I’ve spoken to are very excited by the possibilities that are opened to them and their organisations, particularly with regard to increasing the reach of their collections. This has particular significance, of course, for a country in which some of our museums are geographically remote.

This week I’m presenting at MGS’ Digital Transformation Network, and running an editathon in Paisley that’s a partnership between the University of the West of Scotland and Paisley Museum. (There is I think real potential for this kind of partnership, matching universities with an interest in OER with local cultural institutions, to succeed. Fingers crossed!) I’m also looking forward to and planning for two - possibly more - editathons in January 2016.

One last thing: In the past month or so, I’ve started training in the visual editor, with just a smattering of markup. It is a complete game changer, and I cannot emphasise enough how important I think VE will be in encouraging cultural sector staff to become editors, and indeed to stay editing...

Get updates on activity in Scotland

In November the English Wikipedia reached a major landmark: its five-millionth article. This is a phenomenal effort and has been put together with the help of hundreds of thousands of volunteers. The five-millionth article is about Persoonia terminalis, a shrub native to Australia. You can try your hand at guessing when we will reach ten million!

Dates for the diary[edit | edit source]

The next two months will see another two milestones: the 100th London Wikimeet takes place on Sunday 13th December and on Friday 15th January Wikipedia celebrates its 15th birthday. You are welcome to come to the wikimeet and we hope to have news about celebrations for the 15th birthday soon.

And finally, on Friday 8th and Saturday 9th January we are holding sessions for our volunteers to learn project management and manage volunteers. Spaces are limited, so if you're interested let us know by 17th December.