GLAM-Wiki 2013 took place on 12-14 April 2013 at the Conference Centre of the British Library. From the start of the planning phase its aim was to bring Wikimedians and GLAMs together to share their experiences, and to inspire any representatives of cultural institutions interested in a partnership with Wikimedia UK. With this in mind, we created three strands to the event:

Wikipedians and GLAMs are both looking for ways of spreading their information in the widest possible way. It sounds like a perfect match, and indeed over the three days of the conference, with over 150 people attending, Wikimedia UK has facilitated an impressive ideas exchange. It was clear from the start that the conference centre at the British Library was buzzing with possible projects, case studies shared, new approaches.

The immediate post conference feedback from the conference was generally positive, with attendees saying they were happy with the overall quality of GLAM-Wiki and the range of topics covered. There were many highlights, and people were especially impressed by Michael Edson’s talk on “Scope, Scale and Speed”. A recurring theme was that people felt GLAM-Wiki was a great opportunity to network and learn about what was going on in other institutions. Details of that immediate feedback can be found here, and if you’re interested in the presentations WMUK has uploaded videos of some of the talks to YouTube.

A year on, we came back to the participants of the event to ask them about longer term effects of their participation in the conference.

We received 34 responses out of 151 attendees who were reached by the survey with a series of notifications.

Initial questions explored the make-up of the audience. The event was targeted both at GLAM representatives and the members of the GLAM community, so it was useful to see the breakdown of these groups at the event.

37 responses were given (multiple choice was possible) based on three main answer options: Wikimedia community volunteer, Cultural institution representative, or Other. The two main groups that emerged from the ‘other’ category were Wikimedia chapter staff, and, interestingly, Academic sector representatives. 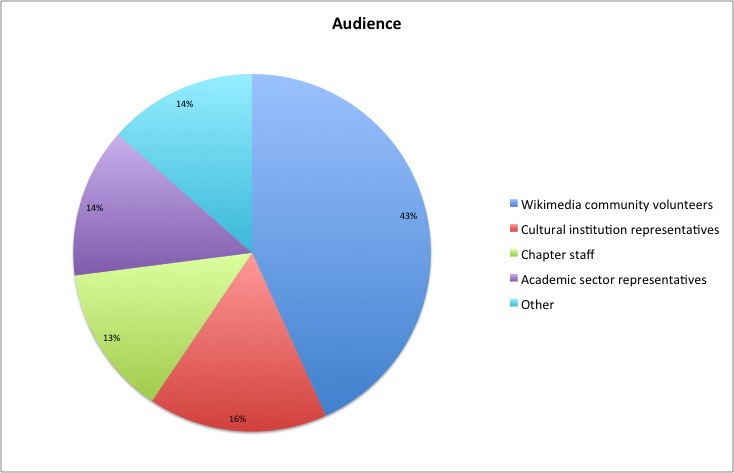 Looking at the registration details for the conference, however, it may be deduced that the Cultural institution representatives were a more significant part of the conference. It may be that they had less time available to participate in this survey.

As stressed from the beginning of planning for the event, one of the key aims of the conference was to facilitate connections between people, so that they can build on existing or possible projects and collaborations. The three questions below explored these considerations.

How many contacts did you establish during the conference? 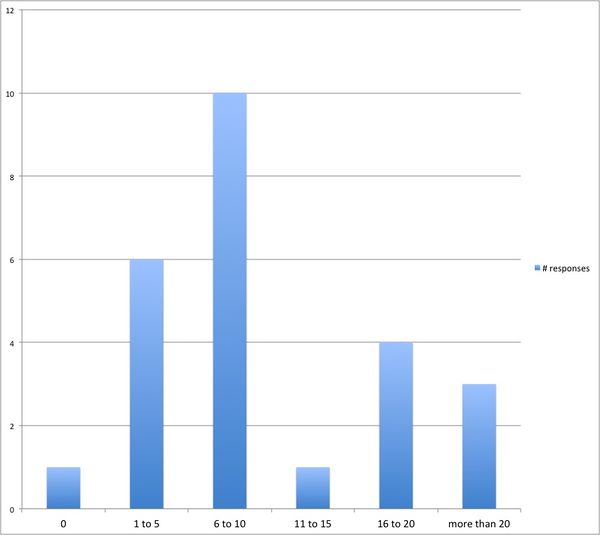 How many of those contacts have you been in contact with since the conference? 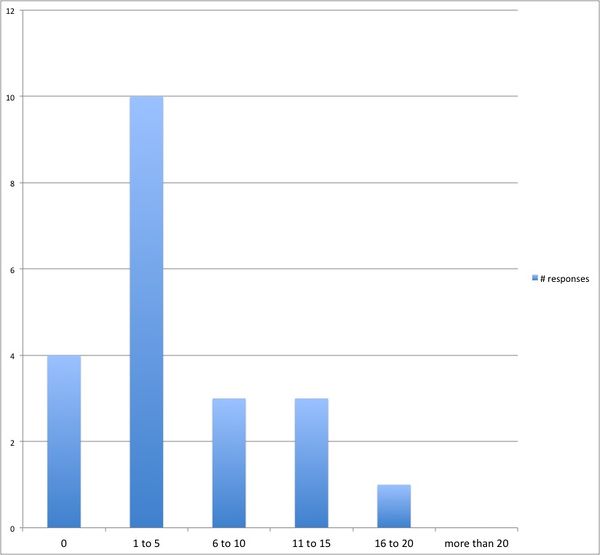 How many contacts have you worked with since the conference? 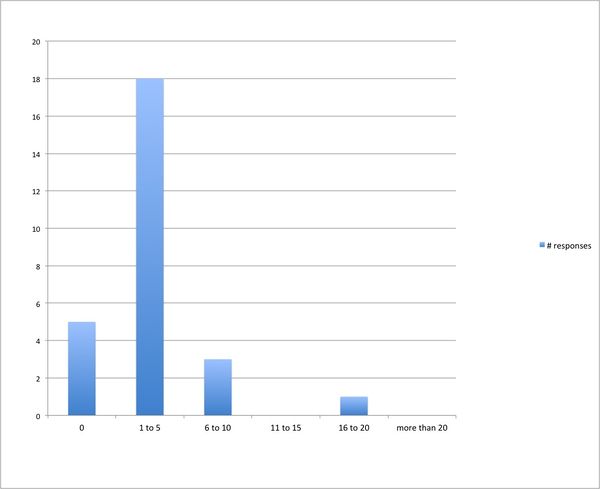 We can compare the average and median responses for each of the questions: 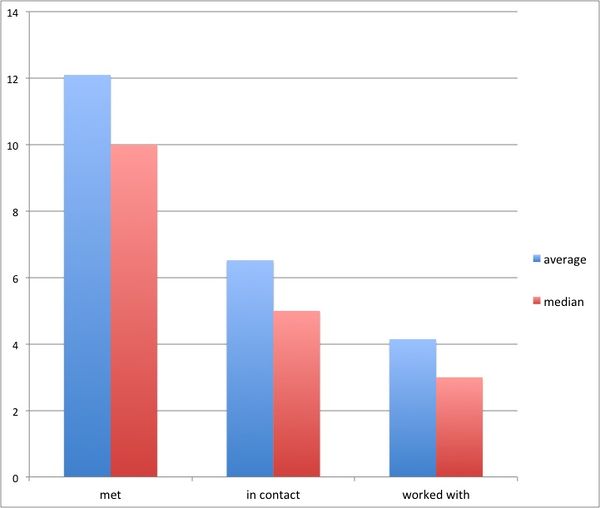 The second overarching aim of the conference was to inspire the attendees with what they have learnt so that they start new GLAM projects of collaborations. For this aim, we asked about what the participants learnt at the conference and have been able to use since the conference ended.

We received 60 answers in total - it was possible to give up to 3 answers. 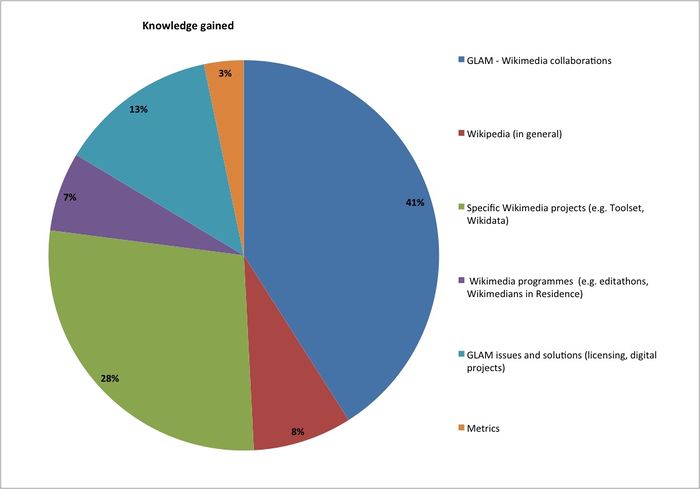 The word cloud below illustrates key areas that were explored and learnt about during the conference: 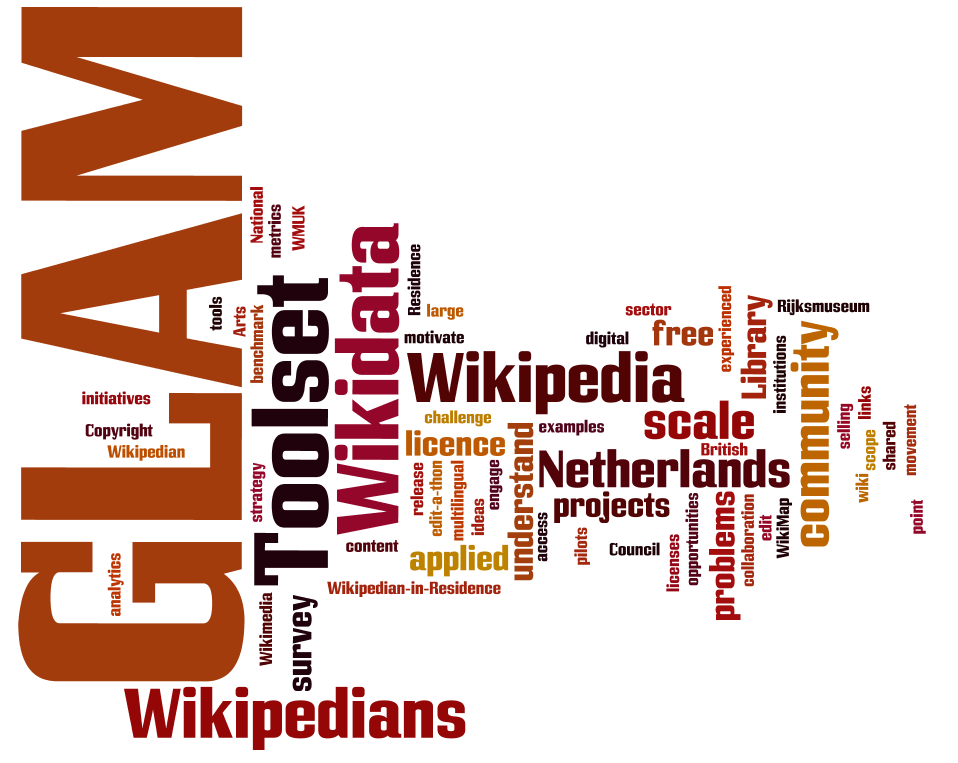 With a year long perspective on the conference, we were interested to see if the event helped people in their open knowledge work. We asked about new projects or initiatives that have been started by the participants with the knowledge or connections they gained at the conference.

22 (65%) of all the respondents indicated at least one project that they have either started or planned to start. It was possible to outline up to three projects. We received 33 answers in total. Of the programs and initiatives participants have implemented as a follow-up to what they learned at the conference, 10 (30%) of survey respondents reported they were currently planning or implementing a project and 22 (67%) had already implemented (some reported projects did not include an indication for the state of the project).

The projects and initiatives reported most frequently included GLAM events and collaborations; efforts on specific wiki projects like Wikipedia, Commons or Wikidata were mentioned in 11 instances (33%) and using tools for monitoring and evaluation like the GLAMwiki toolset were raised 4 times (12%). 5 respondents (15%) talked about documentation efforts such as making podcasts or videos. 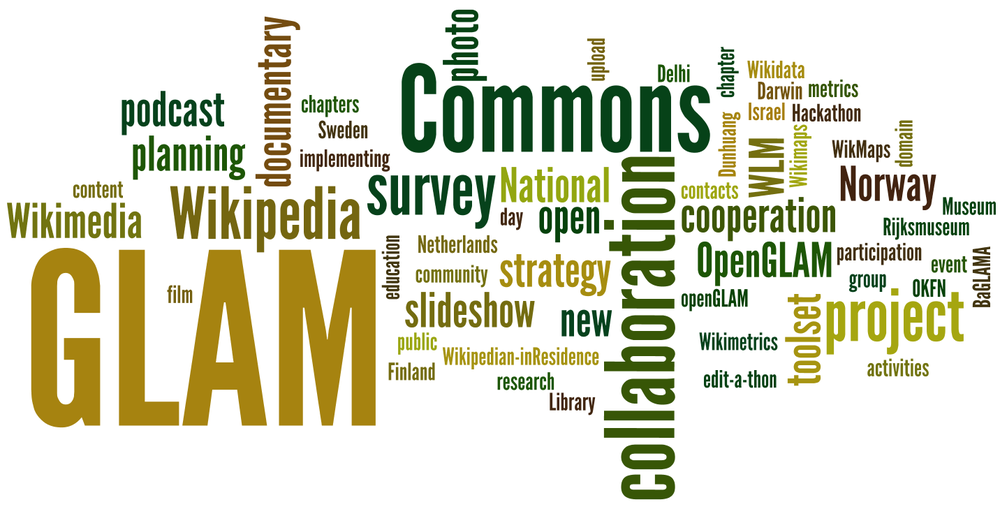 We have provided a space for the survey participants to feed any other comments to us. Out of 17 responses, 4 were negative (3 about the untimeliness of the survey, and one about lack of follow up from a conference session), 2 neutral (no comment at that time / suggestion for future improvement), and 11 positive. A vast majority of these focused on strong, inspiring content of the event itself - a word cloud visualisation shows some of the highlights.

Day rate hire of the whole of the British Library conference centre + AV in the main auditorium and in each of the breakout rooms: