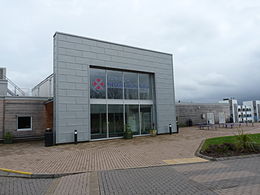 The University of St Mark and St John, aka Marjon, our hosts for the event.

This is a report to the board and staff of Wikimedia UK (and anybody else who is interested) on an editathon/training session held at he University of St Mark and St John (aka Marjon) in Plymouth on 3 April 2014.

This event came about as a result of an event I ran at the North of England Institute of Mining and Mechanical Engineering in Newcastle last November. Gil, Marjon's archivist, attended the Mining Institute event and was sufficiently impressed that she was moved to request a similar event at Marjon. I agreed to organise such an event in principle, and planning began in earnest after the university's Christmas break. At around this point, I began to keep Toni Sant abreast of developments, having previously made him aware informally of the possibility of such an event. Gil liaised with the events administration team at Marjon to book rooms and get a quote for the cost for catering, which I took to Toni for budget approval. Once this was agreed, Gil and I decided on a date of 3 April. Gil advertised the event internally within Marjon, with a particular focus on staff and volunteers at the archives, and to some local contacts.

I do not believe we have any volunteers who are experienced editors in the south west, and a request on wikimediauk-l for volunteers solicited only one response from a volunteer in the region, who was unavailable on the date in question, so I approached two volunteers with whom I had worked before (Doug Taylor and Chris McKenna); Chris kindly agreed to transport materials from the office. The three of us travelled down on 2 April (Doug drove and kindly picked Chris and I up en-route to reduce the costs) and met Gil at Marjon in order that we could view the room before the day and talk through expectations for the day. Gil had around fourteen expressions of interest, and eight people turned up on the day, though several dropped in and out due to other commitments. After tea and coffee and introductions, I gave a basic overview of Wikipedia, with a particular emphasis on notability and conflicts of interest, following which Gil gave a tour of the archives. During the tour, we asked the attendees to find a subject they could write about (eg a notable Marjon alumnus) in the afternoon session and some source material to reference in the article.

The tour was followed by lunch, which WMUK funded, and the afternoon session was given over to hands-on editing. I took the attendees through some pre-planned exercises (which we have quite well rehearsed by now) covering references, userpages, and using talk pages, before allowing them to write about the subjects they had researched in the archives earlier. Topics edited included the list of notable alumni on the article about Marjon, a spitfire crash on Dartmoor during the Second World War, and Dudley Stamp (a geographer who organised the first comprehensive land-use survey of Britain since the Domesday Book). Others chose to work in groups or to continue experimenting in sandboxes or on their userpages.

Feedback from the attendees on the day was overwhelmingly positive. All found the day useful and interesting, and several left with intentions of continuing to contribute or with food for thought for further use of Wikipedia within Marjon. Two attendees (a learning technologist and an academic) were very interested in the idea of students editing Wikipedia as part of their course and became more so after I explained some of the things Toni has been doing with his students in Scarborough. I have put the former in touch with Toni by email. The prospect of an event for students was mentioned, and Gil was very keen on the prospect of follow-up events in the archives. I cannot heap enough praise on Chris, of whom Gil was highly complementary in an email after the event, especially "for his excellent and clear explanations of the technical aspects of copyright". Gil further stated that she "could not be more pleased" with the event.

Harry using the interactive whiteboard for a demonstration

Gil distributed left-over literature and merchandise to students in an attempt to enthuse them about Wikipedia.

We managed to collect seven usernames (I believe the few whose details we did not collect were out of the room at the time that we collected them):

The total cost of this event was relatively high due to Plymouth's comparatively remote location and our lack of volunteers in the area. I am not privy to the exact cost of bookings made through the office, but I believe approximately £300 was (or is due to be, on completion of paperwork) spent on accommodation in the Travelodge, a little under £100 on Chris's and my train fares, just under £200 on catering, and c.£150 on incidental expenses (mainly subsistence expenses for Chris and I). Staff time used was minimal: budget approval and other input from Toni, liaising with Richard N and Richard S with regard to booking and expenses, some input from Katie. We borrowed WMUK's mobile WiFi device, which was not needed for the event in the end but is nonetheless an extremely useful piece of kit to have available, and Chris requisitioned a supply of merchandise and literature to distribute at the event.

In the medium to long term, I hope to develop the relationship with Marjon further, using the partnership as a nucleus around which to build a Wikimedian community in Plymouth. I did attempt to hold a meetup in the city during my time there; I received several expressions of interest, but nobody was able to make it. Staff did not believe that the extra night in the hotel that would have been required for me to host the event at the weekend provided value for money and so the meetup was held on a Thursday evening; this probably didn't help, but the short notice at which I advertised the meetup and other factors beyond our control (such as the closure of the railway due to the infamous storm damage at Dawlish) probably had a greater effect. Looking ahead, I hope to recruit local editors to help with further events at Marjon, possibly through a second attempt at a meetup or possibly establishing a meetup once we know some local Wikimedians. I will discuss this further and put in budget proposals at the appropriate time.

A few things could have gone smoother in the organisation of this event; some of these are things I've raised previously:

Chris took some great photos, which are available on Commons.