Part of the Board meeting on 8-9 September 2012 incorporated a strategy day. This day has been recorded here, but was not a formal meeting, and as such it has not been minuted as one.

Everyone introduced themselves, and a few ground rules were laid down. Fae wanted more of the notes about the meeting to be captured than last year - this will be Richard's role. Steven, the facilitator, went over the idea of a 'feedback sandwich' - having a positive, then a negative, then a positive. He encouraged everyone to be as positive as they can, rather than focusing on negativity.

The outcome from today should be an activity plan!

We reviewed our shared vision, at Vision, and also reviewed the Strategy Day minutes from last year (on the office wiki)

Everyone wrote down what they wanted from today, both personally, and for the group.

We then discussed the various problems we're coming across: particularly civility. An uncivil environment makes it difficult for us to function. It'd be a good idea to have 'civility' as a value, perhaps? Or civil discourse? Doug says that the important thing is to create an environment in which people feel that they can contribute. Meeting people in real life is a good idea and helps solve the issue, a little.

What do we value? We value:

This is a list of things which various people felt were harming the mission. It doesn't reflect whether or not these were minority or majority views.

How to fix these problems[edit | edit source]

We then used stickers to 'vote' on the most important problems or important strengths. Everyone was given seven stickers. Not all trustees voted. We then split into teams and worked through how we could fix these problems (or capitalise on the strengths), focussing on the most voted for ones. A table[1] of the ideas follows: 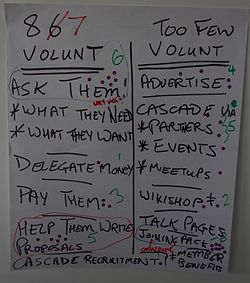 There was a fair amount of discussion about how we can manage a budget of this size and complexity. We don't have enough 'thought leaders' to do this - it's not just an issue of money. We will probably need to hire volunteer "thought leaders"! There was lots of discussion about changing government policy - is this worth a £5k budget line, perhaps? Roger thinks we need to talk about the top two or three ideas that came out of today, and see if they're in the plan!

Joining pack: We are now moving towards getting as many members as we can, even if they are not as active. Previously, we only wanted members if they were going to be active and involved. Part of this is getting a joining pack, with leaflets - how to run an editathon, how to start a wikipedia town - how to edit, even.

DECISION 6.8: The board have decided that we should be getting as many members as we can, even if they are not as active.
ACTION 6.1: SB will set up a blank page so that the community can discuss what questions we should ask if we were to do a general volunteer survey.
ACTION 6.2: KB (& others?) to work on a joining pack for new members.

Good Will vs lack of staff capacity[edit | edit source] 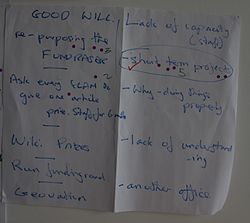 There were a few other ideas: