XX September 2010, UK: The IUCN Red List has teamed up with Wikipedia to include distribution maps in over 25,000 articles about animals and plants. 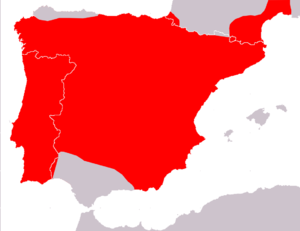 The International Union for Conservation of Nature (IUCN) Red List has made their spatial data of the distribution of animals and plants around the world available under a Creative Commons license. This enables the creation of maps that can be used to enhance Wikipedia articles, as well as content on other Wikimedia projects and other freely licensed websites. By doing this, the IUCN is sharing the important global work that it does in evaluating the conservation status of the world’s fauna and flora in a consistent, reliable and comprehensive way, via one of the largest and most popular websites on the internet.

Gonçalo Themudo, a volunteer Portuguese Wikipedian who has been instrumental in negotiating this partnership, has said: "I have been working on biology articles on Wikipedia since 2006, gathering sources for descriptions, distribution or conservation status. One key thing is missing from a lot of these articles: distribution maps based on reliable sources. The IUCN Red List was the obvious organisation to partner with to provide the data for those maps."

Wikipedia and its sister projects have a huge number of articles in over 270 languages covering a wide variety of animal and plant species, written and maintained by around 100,000 volunteers worldwide. The online encyclopaedia is constantly being improved, with new articles being created and more information being added to existing articles. The IUCN red list classification is extensively used on both Wikipedia and its sister project Wikispecies (a free species directory).

This partnership was established after negotiations between the IUCN red list and their partners, Wikipedia volunteers, and the local Wikimedia chapters of the UK and Portugal. The map images will be created by volunteers from across the world and made available under a Creative Commons Attribution Share Alike license on Wikimedia Commons (the image repository used by Wikipedia).

Wikimedia Commons is a free image and media file repository, and is a sister project to Wikipedia, the free encyclopedia. It was started on 7 September 2004, and is operated by the Wikimedia Foundation. It currently contains over 5.5 million freely licensed images and media files.

Wikimedia UK is an independent organisation that supports free and open knowledge throughout the United Kingdom, including promoting and supporting the projects of the non-profit Wikimedia Foundation.

About the Wikimedia Foundation:

The Wikimedia Foundation Inc. is the US-based non-profit organisation that operates some of the largest collaboratively-edited reference projects in the world. These include Wikipedia, one of the world's 10 most-visited websites, and Wikimedia Commons.