Some detail was captured via a booking page on Eventbrite.

The team of Simon Hay, the professor who set up the event, may be providing post-event comments.

"In terms of general feedback, it was a useful session for all of us getting to grips with the functionality of Wikipedia, the value of logging-in properly rather than just editing as a non-member etc. I think some extra details about how Wikipedia is edited and monitored by the powers above would have been interesting. For those of us who hadn't edited Wikipedia before, it was useful being talked through the different steps of how to insert images and find freely available images.

In terms of specifics, I found the session particularly helpful for getting our student project set up - this would have been very much more time-consuming and a headache/impossible without you showing us how to do this. We'll attempt in the tutorials to pass on some of this knowledge to the students. However, I think that for people at the training day who didn't have a specific task, the time periods which were left open to editing pages may have felt a bit vague, and were lacking in structure. Perhaps a more structured morning going through all the technicalities, and then the afternoon free to work on specific projects would have worked well, allowing people to leave the session once they were happy with what they had come to the training day to achieve.

So, in summary, as a beginner who needs to use Wikipedia and impart a basic knowledge of how to use it, I would it a helpful session. Many thanks again for all your help and advice"

"I enjoyed it. The instructors were very nice, and it was nice to acquire a basic knowledge of how to edit & set up wikipedia pages. They could probably work on the training being a bit more informative, faster-paced, and dynamic. A prepared list of set tasks for the group to work on throughout the day. But overall, I appreciated them coming to teach us."

Apart from the trained participants and some content contributed, the SEEG group under Professor Simon Iain Hay declared willingness to run an assessed student project on Public Health Policy on Wikipedia in userspace. A project page at [1] was set up during the workshop. Professor Hay is also President of the Royal Society of Tropical Medicine and Hygiene, who may be interested in further contact with WMUK. 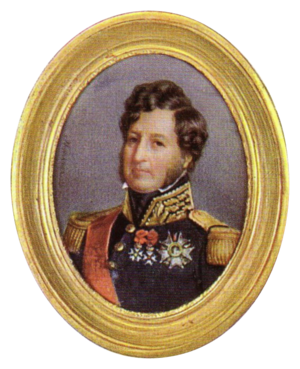 These two images are taken from the example of images that was presented to the group.The image of Louis Phillipe (right-hand side) has the minimum needed for an image to be added to an article. The image of Napoleon (left-hand side) has been tweaked - it is larger than the default size and also it has been forced to the left. The code for both cases can be inspected in pressing the edit tab.