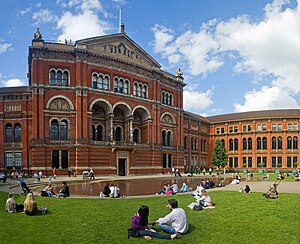 Courtyard in the Victoria and Albert Museum

The Victoria and Albert Museum run a Web Weekend and have invited Wikimedia UK to take part by holding a public Wikilounge. This was a joint outreach event to encourage new contributors to help with improving the access to cultural content. The V&A run a page on their website, there was a hashtag recommended for tweets and there notices for the public about what was going on in the Sackler Centre at the time.

All the Web Weekend events in the Sackler Centre were open to the public from 10.30am through to 5pm.

There was a framework programme as outlined below. Remote e-volunteers were part of the day and engaged via IRC, Skype and tweeting.

As well as a free lunch, we also had a limited number of free special exhibition tickets as a reward for official helpers.