This report does not attempt to be a full account of Wikimania 2014. With so many people involved from such a diversity of perspectives it is unclear how a single document could realistically claim to offer a full account. This account is written from the perspective of the three Wikimedians recruited by Wikimedia UK (WMUK) in May 2014 to provide support to the Wikimania London Team. Our role was to provide support to them in such a way that not only was their ambitious programme realised, but also to ensure that Wikimania 2014 would leave a lasting legacy for Wikimedia UK and the UK community. This report is part of our fourth objective: “to build and develop through reflective practice”.

As far as we can determine there has been no reports produced for previous Wikimanias, and we have endeavoured to incorporate both qualitative and quantitative data herein.

We need to express our thanks for the support of our colleagues, the other Wikimedia UK staff, who from the outset welcomed us as part of the team, worked closely with us, shared their knowledge and experience with us and were an integral part of delivering Wikimania 2014. Also Declan Pattison, the contractor who handled technical aspects was amazing.

Finally, we need to say a big thank you to all the volunteers who contributed massively to making Wikimania 2014 a success. At the outset the scale of the task was quite daunting and we had cautionary tales from previous Wikimanias where volunteers had melted away during the event. We offered volunteers access to the whole event on the basis of contributing a single five hour shift. We discovered that two thirds of the volunteers worked two shifts or more with a hard core of eight volunteers working throughout Wikimania 2014: Ed Saperia, Francis Dickinson, Harry Mitchell, Hera Hussain, James Moulding, Kevin McLaughlin, Naureen Nayyaer and Tom Walker.

Our principal partners were the Wikimania London Team, who Ed Saperia had developed from the bid team after it was confirmed that WIkimania was coming to London. They retained their independent identity but collaborated closely with Wikimedia UK and the WMUK Wikimania Support Team. At times the WMUK London offices were bursting at the seams with some staff finding space in the basement of Development House, where they could get on with some work.

The Chapter enhances its reputation for innovation, competence and achievement[edit | edit source]

The Chapter fully involves its wider community, so that they feel ownership and develop as active volunteers into the future[edit | edit source]

A Wikimedia meetup in Cambridge in May 2014

A Wikimedia meetup in Leeds in June 2014

This covers meetups in UK during the May-July 2014 period

Meetups are essentially products of the Wikimedia community in the UK. We did not see our role to artificially create meetups which did not have a sustainable future. Rather we wanted to make sure that we attended a large number of meetups to encourage Wikimania participation. We had a target of increasing the number of meetups by 10%. As we fully organised 1 meetup and shared in the organisation of another, this gives us a metric of 1.5, 10% of 15. 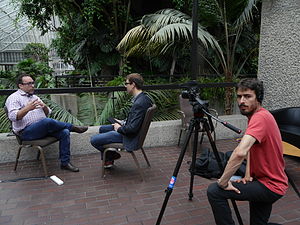 Volunteers being applauded during the Wikimania closing ceremony

Over 10,000 people walked through the Community Village during Wikimania

Our activities were linked to the Wikimedia UK Strategic goals:

It is still too early to really asses the lasting legacy.

Wikimania, like the Wikimedia community as a whole, works on the basis of co-production, and so in a sense everyone was a volunteer. Likewise the ethos of Wikimedia is that it overcomes the distinction between the role of professional and amateur. However, in order to provide effective metrics, our statistics are based on recorded hours of specific volunteering dedicated to delivering Wikimania 2014. Also our statistics do not attempt to cover the amazing contribution of the Wikimania London team, who had been hard at work long before the time span of our involvement (May-August, 2014), and which continued all the way through to the actual delivery of Wikimania 2014. Our figures are based on recorded hours including a portion of Wikimania London activities facilitated through use of the Wikimedia UK London offices.

There were five weekend events in the period May-July 2014 which provided a lead up to Wikimania itself and were aligned with the five major themes running throughout Wikimania.

The Hackathon is a regular ingredient of Wikimania. The WMUK Wikimania Support Team had no particular involvement in the running of this, as Wikimedia Foundation had this in hand. We did however take some photographs:

One key contribution to Wikimania 2014 was the GLAM-Wiki Revolution video, which was premiered at WIkimania and made available on Wikimedia Commons (see right) and YouTube.

This was a concept which was initiated at Wikimedia 2012 (Washington).

Marieke Guy at LinkedUp stand in the Community Village

I was there representing LinkedUp and the Open Education Working group.

Organisations with whom connected[edit | edit source]

They provided a stall for the Comm

The survey was a collaborative effort of the Wikimania Conference and Hackathon organizers along with the WMF Learning and Evaluation team.