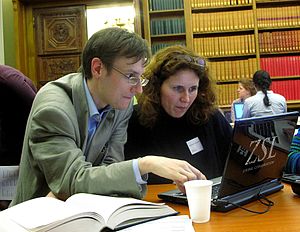 A Wikipedian helps an attendee

Ada Lovelace Day first came to our attention in May 2012. It captured our imagination and we knew we had to get involved. Ada Lovelace Day is about sharing stories about inspirational women in the sciences. If a female scientist does not have an article on Wikipedia it can be difficult to learn about her life and achievements – hence she cannot serve as a role model for others. This event was a step towards changing that, as well as encouraging more women to get involved with Wikipedia. The Royal Society in London shared our inspiration and partnered with us for an editing event on 19 October 2012. This was an ideal match as not only does the Royal Society have a wonderful library, including rich collections of works about scientists, but is also maintaining a network of 'women in science'.

The main focus of the event was to run the editing session focused on creating articles about women in science. We also hosted a panel discussion about women in science to give context to the issues of women’s participation. To say the initiative was popular is something of an understatement – we ran out of tickets within a few hours of announcing the event! The number of participants and their curiosity and willingness to contribute to Wikipedia was extremely inspiring.

It was even more encouraging to see how communities from around the world believed in the importance of what we were doing, so much as to organise their parallel events and link with us online. There were groups in India, Russia, and the United States. During the editathon at the Royal Society, participants created or significantly expanded 20 articles, including Mary Edwards (human computer) and Emily Williamson. This added to 14 articles that were created even before the event started, thanks to the promotion of the editathon. Many of these are now the first results in online searches. There were more than 20 editors present, most of whom were new to Wikipedia. The online participants, of which there were about 25 from the UK and abroad, added even further to the pool of created articles.

The impressive media coverage highlighted both the importance of engaging women and the coverage of "female-oriented" topics on Wikipedia. The articles included pieces in Scientific American, The Independent, The Daily Telegraph, The Guardian, The Huffington Post, BBC (online and on radio with editathon participant Dr Nathalie Pettorelli) and the Signpost. The volunteers involved in the editathon made for a unique event.

Special thanks to Andrew Gray, Katie Chan, Tom Morris and everyone who joined us online. We continue to link with groups who work on increasing female participation on topics related to science, technology, engineering and maths. If you may be interested in hosting an event, or taking part, please get in touch. And remember - there is more work to be done!