Editathon, North of England Institute of Mining and Mechanical Engineers/blog

From Wikimedia UK
< Editathon, North of England Institute of Mining and Mechanical Engineers
Jump to navigation Jump to search 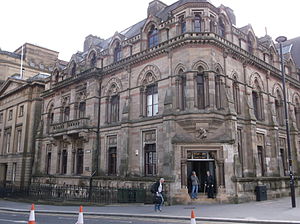 For fans of the Victorian Gothic and Dr Who's Tardis (Wikimedians must certainly have many) a visit to Newcastle upon Tyne's North of England Institute of Mining and Mechanical Engineers aka "the Mining Institute" is a must. The building is an outstanding creation of Victorian Gothic and as with the Tardis there seems to be a lot more inside it than the outside might suggest.

Robert Forsythe began talking to the Mining Institute about a relationship with Wikimedians in the summer, which was cemented by a visit by Harry Mitchell which was a direct result of the first Newcastle meetup in September. The outcome on the 6th November was a very successful Editathon, North of England Institute of Mining and Mechanical Engineers. Harry Mitchell fronted it, 12 folk attended from the North East. Four Wikimedians (Peter Gans, Dan Garry, Chris McKenna, and Harry Mitchell) travelled to Newcastle to assist. One newcomer to Wikimedia travelled from Plymouth and was so impressed by the day she requested an editathon for her institution. At least five new accounts were created on the day (several people had already created accounts in anticipation of the event) and the new editors, assisted by the experienced Wikimedians, made edits to multiple articles relating to the Mining Institute's collection and uploaded a couple of images to Wikimedia Commons.

The exercise was designed to cement relations between the staff and volunteers of the institute and Wikimedians. It was a great success in this, partly because some of the Wikimedians who travelled in came the night before and attended a lecture by Bill Lancaster in the Mining Institute's lecture theatre. The lecture revealed that key contributors from the North East have not been well served by classic academia despite a wealth of information existing about them. Bill Lancaster expressed the hope that Wikimedia could be a tool to pay people like Christopher Blackett and Edmund_Mills_Hann their due.

A number of the institute's trustees and management team spoke directly about the opportunity they saw over the two days the Wikimedians were in town. As part of the learning curve, Jennifer Hillyard the institute's librarian took everyone on a total tour of the Institute. This included seeing a very early painting of the coal industry whose uploading to Wikimedia Commons she suggested. The Institute has always had an excellent library. However in recent years some very significant collections threatened by the implosion of Britain's coal mining industry have arrived. All of us were somewhat stunned by 16 roller racked rows of material which had arrived. One whole row contained 16,700 pamphlets from the Coal Research Establishment Stoke Orchard by Cheltenham. Another massive rack is full of German mining resources. The Institute is therefore in pole position in terms of providing an authoritative view into the mining world of Britain and further afield. And it wishes to see Wikimedia Commons, Wikisource, Wikipedia contributions as routes whereby its increasingly very rare holdings are made available to the world wide audience.

Discussions are underway about the possibility of a follow-up event and about other projects which can be undertaken with the Mining Institute.

Written by Robert Forsythe who was previously our first Wikimedian in Residence in the North East of England, serving with the Tyne & Wear Archives & Museums service. Since the summer he has been assisting the Mining Institute grow its Wikimedia relationship. He and Harry Mitchell ran the event.