Back to Contents
Archive
January 2013

Hello from the Office - Jon Davies 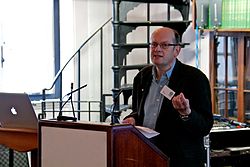 Jon Davies looks ahead to what members can expect to see staff help the community deliver in 2013...

I am really pleased that we have our 2013 Activity Plan is in place. Have a look at it - it lays out the programme of work the Chapter will be undertaking over the next 12 months. As I say on the page I prepared this plan with a view to putting at the foreground activities that will develop our volunteer base through activities and workstreams that encourage participation, and develop new generations of community activists willing and able to take on the development of the chapter.

That is a wordy way of saying; if we don't build up our volunteer base we won't be doing our job. Staff are here to support the volunteer community and help make things happen. The appointment of a full time member of staff with the role of supporting volunteers will be crucial to this.

The main role of volunteers will of course remain editing and contributing to Wikimedia projects where they can with images, references, new content (you name it). Yet, we need people to come to wikimeets, do the Train the Trainers course, get involved in our GLAM and Education working groups, attend editathons, train newbies and participate in the day-to-day work and debates of the Chapter.

Members can gain the most by taking advantage of these opportunities funded through the donations of millions of readers, which are all geared towards making high quality content freely available for anyone to access. If you have a spare hour a week or even more, there are ways that you can get involved in the Chapter - you will get all the support you need from the staff in the office - just email membership

Read below for about WikiConference 2013 in Lincoln in June, where members can vote at an annual AGM and find out more about direct participation in the Chapter.

Badges ready for attendees of WikiConference 2012

Tom Morton writes as one of the Wikimedia UK volunteers who we be helping organise the Chapter's 2013 Annual Conference and members' AGM...

The Wikimedia UK annual conference will be held on 8th June 2013 in Lincoln, a historic county town in the East Midlands. The city was chosen for its mix of rich cultural heritage and trendy modern vibe, and for its location in an area that that the charity wishes to focus outreach efforts.

The annual conference brings together members to voice their opinions about both the charity and UK movement. As well as a programme of speakers and events, the conference plays host to our Annual General Meeting. As a member this is your opportunity to elect trustees (who drive Wikimedia UK's strategy) and vote on important matters. It’s also an ideal time to meet like-minded volunteers and find out how you could participate in outreach and training with the charity.

The volunteer Conference Committee is busy planning an exciting programme, including keynote speakers and cultural events - but we are eager for the entire community to be involved. If you have programme ideas, local contacts, suggestions for speakers or just want to lend a hand then please get in touch by emailing team

More details about the conference will be released in the coming months, including speakers, events and support for travel and accommodation costs. 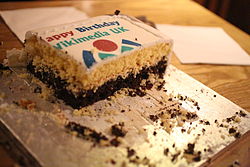 Katherine Bavage attended her first ever meet up in London late last year, and somehow ended up cutting the cake...

I'd started working for Wikimedia UK in July 2012, but to my shame I hadn't managed to attend a meetup until nearly two months after I'd re-located from Leeds to living in London full time in September (mental note to self - get Leeds based meetup established in future!)

In the back of my mind I had known there were some meetups nearer my neck of the woods - namely in Manchester and Liverpool - but like plenty of people I don't drive and cherish my weekends so hadn't had the motivation to make a round trip. Which was a pity - had I gone sooner I would have known what I was missing.

I had assumed that the a meetup would be a fairly focused discussion about Wikipedia and related topics, with lots of people editing on their laptops...well, there were a few laptops, but there was also a lot of people having a drink and a chat about a huge range of things. I met three former Chairs of the organisation, members of the Wikimania 2014 bid team, Open Street Map enthusiasts, and reunited with one of our trainers who I credit (blame for?) setting me off on my editing journey (thanks WSC!)

I ended up chatting about covering the U.S. election night from WikiNews, having a pint and a burger, and eventually being invited to help cut the cake celebrating our anniversaries (one year since becoming a registered charity on 3rd November 2011 and four years since incorporation on 5th November 2008) as one of the staff team - the recruitment of which has marked a major milestone in the growth of Wikimedia UK.

Since then I'm overdue to go another meetup (all that pesky travelling to on weekends to Leeds - seriously, anyone inclined to start a meetup there, get in touch!) and am thinking about dropping by to one of the non-London meetups in future. Currently we have meetups members or anyone interested can attend on a regular basis in Coventry, Manchester, Liverpool, Cambridge, Oxford and Reading, and we'd love to support meetups in Birmingham, Lincolnshire, Wales, Scotland...you name it! If you'd like support to set up a meetup in your area, get in touch by email, and of course if you can get along to an existing meetup, so much the better!

Katherine edits as a volunteer as User:Leela0808 - and will be attending more meetups to get inspiration for topics and projects to work on....

In November, I helped to organise a one-day OpenStreetMap editathon with sponsorship from Wikimedia UK. Wikimedia UK has held a variety of editathons for Wikipedia (and events for Wikinews and Commons), but this was perhaps the first Wikimedia chapter-sponsored editathon for a non-Wikimedia project. OpenStreetMap was started in 2006 to try and build a free map of the world. It's built by individuals like you and me, driving, cycling and walking around, collecting GPS traces and taking notes and photos.

Why did we hold it? To support 'Operation Cowboy', an international OpenStreetMap editathon focussed on improving coverage of the United States. OpenStreetMap has had wide takeup in European countries like Germany and the UK. We have reached a point where OpenStreetMap is pretty good in the UK: I recently tested OpenStreetMap routing on a thirty-five mile trip across both major A-roads and country lanes. With one very minor exception, it gave the "correct" route (that is, the route any sane person would take). Like Wikipedia, OpenStreetMap is not perfect here, it's just "good enough".

The US is unfortunately not so well-developed. The reason for this is cultural, in my view. OpenStreetMap is primarily used by people looking for a map for purposes other than motoring: cycling, hiking, public transport. All the sort of things we do more in Europe. Less use of OpenStreetMap in the US leads to less editing. The idea with Operation Cowboy is that we could do "armchair mapping" from satellite imagery with the intention of giving the local mappers in the US a shot in the arm.

During Operation Cowboy, the six of us worked on different parts of the US: I flitted between a variety of cities (Boston, San Francisco and Ann Arbor, Michigan), while others worked in detail on improving the map in states including Florida and Utah. After the event finished, I got a lovely email from an OpenStreetMap editor living in Los Angeles who was very impressed that a group of volunteers would make time during their weekend to map cities a continent away. She said that when she visited her parents in Michigan, she'd go out and map her neighbourhood.

If you would like to know more about accessing members' microgrants to support your editing or other open source content work please email membership@wikimedia.org. or visit Microgrants

Wikimedia UK is advertising three new posts to expand its staff team - a GLAM Organiser, an Education Organiser and a Volunteer Support Organiser - the closing date for applications is 5pm on 8th February 2013.

These posts will expand the Chapters capacity to deliver outreach works in the Education and Arts sectors, and it is hoped that both experienced Wikimedians and those with experience motivating and delivering programs in partners with volunteers will fill these new posts. Two advertised posts are part time, and applicants interested in applying for more than one role are encouraged to get in touch with questions.

For more information or an application form please email richard.nevell

wikimedia.org.uk - or do call the office on 0208 065 0990 to speak with Jon Davies for a chat about the nature of the posts you are interested in applying for.

According to the latest monthly report, currently over one third of members hold 'grace' memberships only. When your membership is accepted or renewed the term lasts for a year - after this time is up your membership becomes 'grace' for six months, after which it expires.

If your membership is grace and you don't renew it you may risk being excluded from being able to vote if it then expires before an Extraordinary General Meeting, or the Annual General Meeting where Trustees elected. Short story - make sure you renew today for just £5 - if you want to pay buy cheque or bank transfer, just send us an email

In the members survey, over half of our members who didn't have a meetup near them said they would be interested in helping set one up, and two thirds of you wanted to attend events specifically held in your region.

It's time to make this a reality. The Chapter has funding and staff to support members who want to organise social and project-based events in their area. In the next few weeks we will reach out to many of you by email asking what you might like to see happen near you, and suggesting that you group together with neighbouring wikimedians to do something exciting as members in 2013. We know our members have busy lives, so there is no pressure to get involved - but we hope that if you've ever felt like there is a hidden local archive that needs sharing, or a pub your fellow Wikimedians might like, then now is the time to get in touch and make it happen.