A mosaic of 1,200 of the 5 million media files, forming the Wikimedia logo

2 September 2009, The Internet: Wikimedia Commons, one of the largest free media repositories on the Internet, reached the 5 million media files milestone today. Created just five years ago as a common repository of images for the different language versions of Wikipedia, it has grown to include video, animation, sound, and graphics files. Today, it is used by Wikipedias in over 270 languages as well as Wiktionaries (dictionaries), Wikibooks (textbooks), and other projects in multiple languages. With all content freely licensed, media from Commons are used by other individuals and groups including bloggers and news, education, and commercial organisations. The repository is the product of an international collaboration of over 800,000 volunteers, 20,000 of whom are currently active.

The media files come from a wide range of sources, from personal photography by Wikimedia Commons users to images from public archives. Everyone from every path of life can contribute to the repository, increasing the amount of public domain and freely-licensed educational media content available to the world. 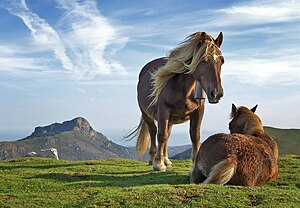 One of over 1,700 featured pictures, and the winner of the "Commons Picture of the Year" competition in 2008

In the last year, Wikimedia Commons has seen several substantial donations of media files. In December 2008, Bundesarchiv (the German Federal Archive) donated nearly 100,000 images. In March 2009, the State and University Library Dresden announced that they will donate nearly 250,000 images, which are in the process of being uploaded. These donations have been mutually beneficial: the archives have benefited from the work of Wikimedia volunteers in categorising these images, checking their descriptions, linking them with appropriate metadata and adding the images to Wikipedia articles. This has led to increased visibility of their works, and a substantial increase in visitors to their websites and the archives' sales of prints.

An image of the excavation at Uriconium, Shropshire, taken by Francis Bedford, donated by Regionarkivet and digitally restored by a Wikimedia volunteer

Wikimedia Commons is also currently receiving influxes of nearly 10,000 media files from two recent free photography competitions of public domain works held by museums: Wikipedia Loves Art was held in museums world-wide, including the Victoria and Albert Museum in London, and Wiki Loves Art was held in museums across the Netherlands. Wikimedia UK is currently planning Britain Loves Wikipedia, a similar event to take place in museums across the UK, aimed at making Britain's cultural heritage more visible, available freely across the world via the internet.

Wikimedia Commons is a free image and media file repository, and is a sister project to Wikipedia, the free encyclopedia. It was started on 7 September 2004, and is operated by the Wikimedia Foundation.

About the Wikimedia Foundation:

The Wikimedia Foundation Inc. is the US-based non-profit organisation that operates some of the largest collaboratively-edited reference projects in the world. These include Wikipedia, one of the world's 10 most-visited websites, and Wikimedia Commons.