The Wikisoba project is a spin-off of the WMUK Virtual Learning Environment, and is intended as a software development initiative concerned with developing lightweight course management tools. It grew out of a perceived need to be able to reuse Moodle quiz questions outside Moodle.

The Wikisoba tool authored by Magnus Manske in Javascript is hosted on Wikimedia Labs. It pulls in sections of any fixed MediaWiki site, displaying them in a plain skin; and interleaves them with questions written in GIFT format.

Examples of quizzes can be found at w:User:Charles Matthews/Wikisoba repository.

For the next step, some new principles are being taken into account. 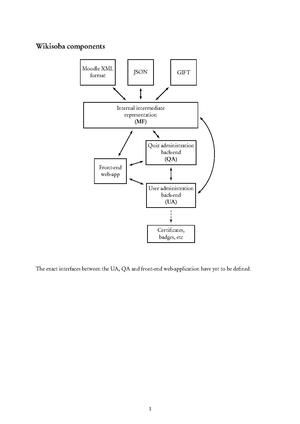 State of the art[edit | edit source]

As an example of the state-of-the-art, http://resources.infosecinstitute.com/cissp-test-1-2-new/ shows a couple of visual question types.

There is a Quiz extension for MediaWiki. There is, and much less known, a Quizzes extension developed by WikiHow. There are numerous and mostly ad hoc types of quiz and survey online. The column-filling type on the Kwizmi and Sporcle sites should be noted because, while it is restricted to typing as input, the "discipline" is clearly related to acceptable learning mechanisms for many people. The "category intersection" type of question notable on Sporcle is ripe for exploitation, based on Wikimedia's category systems.