Back to Contents
Archive
Issue 06 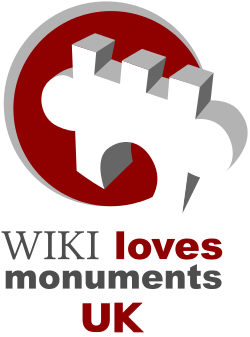 This year Poland turned out to be the most prolific country with 585 contributors posting 45,371 images, with Dawid Galus providing over 4,000 pictures.

The UK was ranked 11th in the stats with 525 contributors posting 7,333 images. Our most prolific contributor is Llywelyn2000 with 1,212 photographs, mainly of churches, graveyards and Iron Age hillforts, but also with some interesting photos of Welsh caves.

Another prolific participant in this year's competition is EdwardX, whose images from different parts of London have a more urban feel. Edward has chosen a broader range of building types to photograph, but both he and Lleywelyn provide interior as well as external views. Llywelyn's choice of more rural subjects gives him the opportunity to include more panoramic shots. The third most prolific photographer in the UK Tilman2007. Active in the UK and Germany, Tilman was a finalist in Wiki Loves Monuments 2012. He has also uploaded 11,074 photos for this years WLM, more than double the next most active participant.

Although England and Wales account for the bulk of the UK contributions in this year's WLM competition, there have also been important offerings from Scotland and Northern Ireland.

It is also well worth checking out the Wiki Loves Monument UK site, which has more details about the competition and the people who make it happen. Although it has only been going four years, Wiki Loves Monuments has already become the world's largest photography competition. Part way through this September it clocked up over one million photos in total. It has proved to be a very popular way of creating extra content for Wikimedia Commons, the image repository that runs alongside Wikipedia. The Wiki Loves Monuments UK Panel will be meeting in early November to decide the winners.

If you want a real treat, make sure you catch the prize-winning photos as these are sure to be really brilliant! 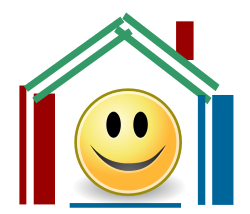 Something I noticed looking through the Wiki Loves Monuments was the increasing number of times uploaders include the relevant Wikidata information.

"Wikidata is a document-oriented database" - so says the Wikipedia article. And, as usual, Wikipedia offers a good starting point to find out about a topic. One good reference is to Wikidata: A Free Collaborative Knowledge Base by Denny Vrandečić and Markus Krötzsch. Written by two of the key people involved in setting up Wikidata, this is a good way into understanding this project. If you're like me, you'll find part of the article going over your head, but enough of it written in plain language to make it really interesting. Another take on Wikidata has recently been published on Wikimedia Germany's blog: Outreach Program for Women at Wikidata. Helen Halbert and Anjali Sharma were newcomers when they were taken on as interns by the GNOME Foundation’s Outreach Program for Women (OPW) on placement with the Wikidata team.

"We both enjoyed seeing the community grow in the short few months of our internship. From the buzz that built up just prior to Wikimania, to the new properties, WikiProjects, and initiatives like the Wikidata Lounge that were proposed by one or two people and then quickly took on a life of their own—it was clear that feeling part of the community was important motivation for contributors who kept coming back to Wikidata."

I am not sure how long it would have taken me to find the Wikidata Lounge without Helen and Anjali's help. It was started in July, just before Wikimania, and already has spawned Wikidata jokes: "A Wikidatan goes on a hiking trip to visit another Wikidatan who was living in the forest. He came upon a mighty river, and on the other side he saw his friend. He calls out, "How do I get to the other side??" His friend looks at both sides of the river and replies: "Well, you're already on the other side!"

So, I hope this has given you a bit more insight into Wikidata. Wikimedia UK is organising a training session on Saturday 11th October, free of charge, which will be very much practically orientated. We are also hoping to develop a pool of accredited trainers who can share their knowledge in subsequent events.

Why not register for the Wikidata training here. 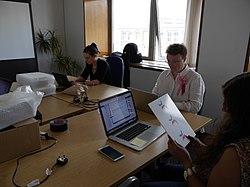 When people describe Wikimanias, it is a bit like the old story of the blind men and the elephant. As each person describes their own experience of one part of the elephant - the trunk, the leg, the tusk etc - none of them are able to summarise the creature as a whole. This report was written by the Wikimedia UK support team - which I had the privilege to be involved with - and this is a report from our perspective. During the four months leading up to the event, our work was focused around delivering according to measurable targets, and this what the report mainly discusses. Our report does not discuss much of the content of Wikimania: it describes the tree trunks, the elephant's legs, which held the whole thing up. We hope readers appreciate this, and if there are aspects they feel are missing, we hope they write up their perceptions. They will be joining the growing number of people who have linked their blogs from the Wikimania 2014 website.

However, as well as enriching everyone's understanding of what was achieved at Wikimania 2014 with personal reflections, another area we are seeking volunteer involvement is with the Wikimania 2014 website. There is a To Do list provided. One key area is making the various videos more accessible. There are already a large number of videos online from the event, but it isn't necessarily very easy for a person with a particular interest to find the relevant footage. One idea is to check out the main places they are stored:

and then create links to a specific item from a specific relevant page (on the Wikimania 2014 wiki or elsewhere), so that interested viewers can find them.

For those with a bit more time available - and video editing skills - cutting down the longer videos into more digestible episodes would be great, and could enable all that good stuff of Wikimania really get out there to a wider audience.

So much went on at Wikimania, it will be a while before anyone can truly assess it. However, with everyone adding their viewpoint, a bigger picture of the "elephant" will emerge: that is the Wiki Way. 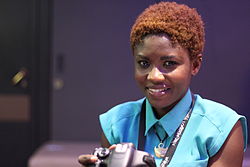 Following discussions with the Wikimedia Foundation at Wikimania, the Planning Wikimedia Ghana group has been given full status as an official User Group

Over the past year Wikimedia UK has been building up a relationship with the budding group of Ghanaian Wikimedians. In March this year we supported an event in the capital, Accra. Then in June we had the support of Sandister Tei, one of the founding members of the Planning Wikimedia Ghana, the first iteration for Wikimedians in Ghana. As she was studying in the UK for a year, she was able to volunteer to help with Wikimania Open Scholarship Weekend. She then received a Wikimedia UK scholarship to attend Wikimania itself. Not only was she very active taking photographs during the event, but she also discovered the WikiProject Editor Retention. This has had a impact on her thinking as shown in her Wikimania Report, that she is working on.

In essence Sandister's idea is to develop a short course to support new editors. The idea is to meet weekly, ideally in person but an online way of working may be developed. Each week new concepts will be introduced, accompanied by an extra "cheat sheet" that the learner can take away with them. Whereas so often participants do no further edits after an editathon, here they will be expected to do a number of edits and to look at edits made by other participants. The details are still being worked out. Sandister is interested in finding other people to help develop this, whether in Ghana or further afield, so if you are interested drop a note on her talk page.

Wikimedia UK will continue to work with Wikimedia Ghana Users Group in a mutually productive way!

After some initial discussions, Wikimedia UK have decided to organise a Volunteer Strategy Gathering on 29th November. We want to create an event where volunteers can have a positive input into how the Wikimedia UK volunteering strategy develops. The gathering will be a one day affair, with Wikimedia UK covering the travel costs for people attending. Planning for this will take place on the talk page. Some ideas have already emerged:

These are just some of the ideas which the gathering could pick up on and develop. Wikimedia UK is very aware of the dangers of being too London-centric, particularly after the influx of London-based volunteers through Wikimania. As can be seen above, one of the outcomes of this gathering is that we will have a much clearer idea of how local activities can be supported by the charity.

The Volunteer Strategy Gathering has the potential to be a milestone in the development of Wikimedia UK - but only if you participate!

In the News[edit | edit source] 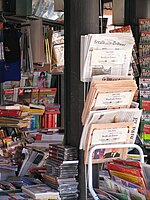 Wikimedia UK has been given some complementary off peak week day tickets by The Tank Museum in Bovington, Dorset so that our photographers can improve our coverage of their tanks and other vehicles. Interested photographers can apply for a ticket by contacting jonathan.cardy(at)wikimedia.org.uk with their snail mail address.

The Public Catalogue Foundation has donated several books from their Oil paintings in public ownership series. We have three of their County Series (Essex, Staffordshire and Nottinghamshire) plus the volumes for the Imperial War Museum (London), the Fitzwilliam Museum (Cambridge) and the Government Art Collection which features painting across the UK and Overseas. To borrow any of these from the Wikimedia UK Library, please contact Wikimedia UK: we will arrange delivery and collection.

Preparations are well under way for the third annual EduWiki conference. EduWiki Conference 2014 will take place in Edinburgh in St Leonard's Hall. Registration is now closed and the conference will be full to capacity. The conference will be opened by Peter McColl, Lord Rector of the University of Edinburgh, and offers a good mix of home-grown talent and visitors from overseas. This includes Floor Koudijs, Senior Manager, Wikipedia Education Program at Wikimedia Foundation, her colleague Tighe Flanagan and Filip Maljković, Wikimedia Serbia. One feature of the venue is that it used to house the original St Trinian's School. Ronald Searle, who created the fictional school just after the Second World War, met two of the pupils when based in Scotland whilst in the Army. His books inspired several films, two following the franchise being rebooted in 2007. There is every prospect that as delegates gather in the St Trinian's room, they too will be inspired.

Following their participation in EduWiki 2014, the Wikipedia Education Collaborative will take the opportunity have a get-together. This is an international initiative whose motto is: We believe that Wikipedia belongs in education!. It was only founded in March this year and is already making substantial progress (See here for more details)