As an organiser for WikiIndaba in Johannesburg 20-22 June 2014 we would like to apply for a grant to pay for transport for fifty conference attendees to attend an event hosted by Creative Commons South Africa. Creative Commons South Africa is hosting an event for the open access community over the same period that Wikimedia ZA will be hosting WikiIndaba. WikiIndaba is a Pan-African Wikimedia conference supported by the Wikimedia Foundation, a Wikimania for Africa. Unfortunately this expense was unforeseen at the time Wikimedia ZA applied for grant funding from the Wikimedia Foundation. We would like to apply for grant funding from the

The invoice for bus transportation for attendees of WikiIndaba 2014 in Johannesburg to attend an event hosted by Creative Commons South Africa.

Please describe the project in 1–2 sentences
Transport for 50 WikiIndaba conference attendees to attend a special event hosted by Creative Commons South Africa for the Open Community in South Africa as a whole. Both events overlap and are happening in the same city; it would be a great shame if the Wiki community in Africa could not attend the event due to a lack of transport.

Are you currently a member of Wikimedia UK?
Yes

This project will entail the hiring of a bus to transport 50 WikiIndaba attendees for one return trip to an event within the city of Johannesburg.

Please briefly describe what will be accomplished if the project is successful.

Please provide a list of measurable criteria that will be used to determine how successful the project is. You will need to report on the success of the project according to these measures after the project is completed.

Measures of success
Successful transportation of 50 attendees to and from the event.

How will this project support Wikimedia UK's Outcomes, charitable objects and vision, values and mission?
It will allow Wikipedia and other contributors to Wikimedia projects from across Africa to connect with other members of the open community in South Africa. 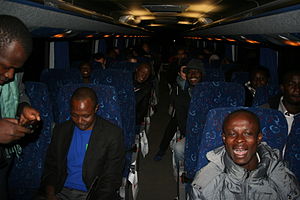 The bus used to get to the Creative Commons event that Wikimedia UK paid for. Thank you Wikimedia UK! 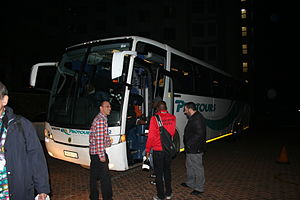 African Wikipedians boarding the bus used to get to the Creative Commons event.

The bus was hired for R6,400 as reflected in the invoice above and all attendees who wished to attend the Creative Commons event got there and back as planned. It was a success.

Hi Douglas (and WMZA), thank you for the application. The members of the Grants Committee will get back to you soon with any comments they may have. -- Katie Chan (WMUK) (talk) 16:41, 2 June 2014 (BST)

Hello Douglas. This is one of the more unusual applications we have received, but I'm currently inclined to grant it. This may not be strictly within Wikimedia UK's jurisdiction, but I see no reason why Wikimedia UK can't make a reasonable contribution given our current financial situation compared to other chapters. If I'm reading this application correctly, you are asking for £500 to hire a bus to transport fifty Wikimedians to and from a Creative Commons event within the city of Johannesburg. I did initially think that £500 is a lot of money for this, but that does only work out at £10 per person (£5 each way), which seems reasonable.

I'm currently presuming that walking/public transport is not a viable or safe option here. Is that the case? Also, is £500 an exact amount or just an estimate of how much hiring the bus will cost? If we've got to use estimates, then estimating a "worst case scenario" might be best, with any underspend dealt with later on. Finally, one small condition of receiving this funding might be to add Wikimedia UK as an official partner for Wiki Indaba 2014. Is this okay? CT Cooper · talk 18:11, 3 June 2014 (BST)

Hi CT Cooper, you are correct. We are indeed going to use the money only to book a bus to transport 50 of us to and from our event location to the Creative Commons event location within Johannesburg. Unfortunately public transportation within South Africa is very underdeveloped and the only option we have in that regard is the newly completed Guatrain but the down side of using it is that we would still need to charter taxis from the Guatrain stations and the train stop at 9:30pm which means we would all be stranded at the Creative Commons event. No an ideal situation. On the up side we have found secured a quote from a bus company for a great deal less than the original quote we got. As such I am happy to say that we are now only asking for R6,400 or £360. I am updating the grant application accordingly now with the quote we have received. --Wikimedia ZA (talk) 10:47, 5 June 2014 (BST)
Regarding the other issues. The origninal £500 was based on a quote we had recieved for this. I can adjust the updated grant request amount up from £360 back to £500 (or some number in between) just in case there are unexpected costs or we have to use a different bus company? As for adding Wikimedia UK as an official partner for WikiIndaba, we would be more than happy to make this happen.--Wikimedia ZA (talk) 11:02, 5 June 2014 (BST)

Thank you for your answers. I'm happy to give this request my full support. If you can get it at £360 then great, but I would presume £500 for now in case you can't or there is a significant alteration in the exchange rate. Both amounts are reasonable in my opinion. CT Cooper · talk 19:57, 5 June 2014 (BST)

Happy to support this. If the office can advise on making sure we have detail around how many people we've supported, etc. and obviously if this is an opportunity for you to bring new people into your local community then that'd be amazing, but you're in a much better position to consider how best to do that than I am! :-). It'd be good to get perspectives (blogs, etc.) after the event, and hear how things went - really look forward to hearing more. Cheers Sjgknight (talk) 22:28, 5 June 2014 (BST)

Hello folks, I'm not a member of the grants committee but I think is a good project and would be a worthwhile grant. I think if WMUK is in a position to show support for other Wikimedia chapters and Wikimedians, then we should. This would fall under strategic goal G5 - develop, support and engage with other Wikimedia and open knowledge communities. Stevie Benton (WMUK) (talk) 11:55, 5 June 2014 (BST)

Douglas, this application has now been approved on the basis that Wikimedia UK will be noted as a partner supporting WikiIndaba, and copied into any report you will be producing afterwards noting how the event went, how many people supported etc. Hope the event goes well. I will work out payment with you by email. -- Katie Chan (WMUK) (talk) 12:05, 9 June 2014 (BST)