Wikimedia UK's 2013 conference is being organised by the Conference Committee; it will be a one or two day event, outside London, for UK Wikipedians. It will also incorporate the Wikimedia UK 2013 AGM. In the last few months the committee requested quotes for potential conference venues. These were discussed and a shortlist drawn up featuring Lincoln and Manchester. After site visits we now have two options, one in each city, to choose from. Details of the cities, venues, volunteer teams and other information is set out below.

Note that certain information (such as prices) cannot be published. However, for reference, The Lowry is the more expensive of the locations (by approximately a factor of three, factoring in quotes for catering). Full information is available to ConfCom members, WMUK trustees and WMUK staff on the WMUK internal wiki.

WikiConference UK is Wikimedia UK's annual conference for volunteers and members; it incorporates talks of interest the community and the Annual General Meeting of the charity. In 2013 it is being organised by the conference committee, a volunteer committee tasked with liaising over the WikiConference UK and the Wikimania 2014 bid.

This year we want to build on the success of last years conference, without going over the top, to provide a fun and interesting event for UK Wikimedians.

The committee considered a number of quotes and venues, with the only fixed requirement being that it was not located in London. After a short deliberation Lincoln and Manchester were chosen as possible host cities. The committee organised visits to venues in both locations: Hasina, a WMUK intern, visited Manchester and KTC, Tom Morton and Harry Mitchell visited Lincoln.

After reviewing the venues and firming up the quotes two, one in each city, were selected as potential venues for the 2013 conference.

A survey of members was conducted to identify a) the region of the UK (or elsewhere) they would be travelling from and b) how long they would be willing to travel from to reach the conference. Estimates were made for travel times from each region and compared with the data to estimate the number of people unable to attend each host city.

The survey got 27 responses (a reasonable percentage of the potential attendance) of which 8 (30%) would be unlikely to travel to Manchester and 5 would be unlikely to travel to Lincoln (19%). The bulk of respondents (nearly 50%) were based out of London; travel times from London to the host cities is about even (Manchester just over 2 hours, Lincoln just under 2 hours). In fact for travel it is split fairly evenly, with Lincoln being most accessible for the east of England and Manchester for the west - cross country travel, for both locations, is time consuming.

The office supplied regional statistics for the current membership. Based on estimated travel times around 50% (124) of the membership is within approx. 2 hours travel time of Lincoln, and 47% (116) within 2 hours of Manchester. Again, the bulk of the members are London based (30%).

Once in the two locations the Lincoln is 5 mins taxi (15 mins walking) from the station, Manchester is ~15 minutes by tram.

Based on this feedback, Lincoln is marginally more accessible than Manchester. But the difference is small enough to make this a relatively unimportant factor. 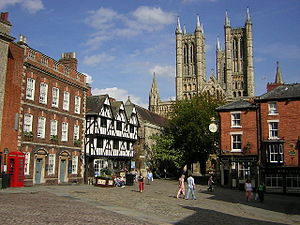 As a host city Lincoln offers the charm of a cathedral city with the buzz of a modern metropolitan area. The proposed venue is the Dean Sport & Leisure facility, a brand new building and part of Lincoln College. The city sits on the edge of an escarpment, Lincoln Cliff; the historic castle and cathedral area at the top of the hill is linked to the "hip" Brayford area (home to the university, restaurants and bars) by "Steep Hill" (aptly named!) and the pedestrian high street. The college venue is located just a few minutes from the shopping area, almost halfway between the two centres. 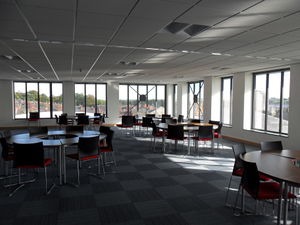 One of the breakout rooms

Deans Sport & Leisure is a brand new complex, part of Lincoln college. The venue is both a sports centre and conference/classroom complex. The area is quiet and "studenty", with a large plaza in front of the venue.

Inside it is modern and clean, and the conference area seems quiet and secluded. The conference room itself is HUGE. The venue says it will accomodate 81 people (80 seated and one speaker :)) but there is ample space to move around and several small (quiet) sessions could take place in the room itself (around the odd semi-circular tables..). The room has massive picture windows down one side which look out over the city - unfortunately not the picturesque parts, but still light and airy. Break out rooms take the form of classrooms, up to three, with a capacity of around 25.

The venue has a duty manager as the on-site point of contact & first aider who will be available all day. The venue itself will be available until 20:00, and possibly later if required (we would need to organise this in advance).

Room hire is charged by the hour (catering charged per delegate) at reasonable rates: projected overall cost for venue + catering would be ~£1000-1200

Catering is provided by the college catering service and will be served in the main room - which has lots of space for clustering about.

Catering consists of tea/coffee (with optional biscuits) at intervals, plus either a hot or cold lunch.

Located on the former site of Manchester Docks, Salford Quays has been a huge urban regeneration project for the North West. Featuring arts and cultural establishments (alongside the Lowry is the northern arm of the Imperial War Museum), creative industry and trendy living. The area also has extensive water sports facilities.

Links with the city centre are by tram, a 15 minute journey, and from the M602 motorway. A direct tram link exists between Manchester Piccadilly train station and Salford Quays, which costs around £3-4. 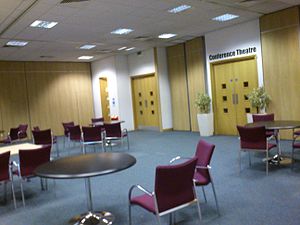 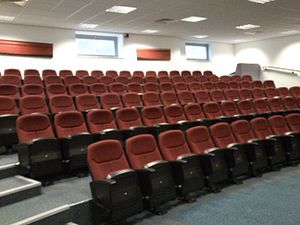 Opened in 2000, The Lowry is the centrepiece of Salford Quay's regeneration. A major arts venue, featuring theatres and gallery space, it is one of Manchester's most visited attractions. The Conference Theatre is a fixed "lecture hall" style theatre with natural daylight, air conditioning and seating for up to 100. Directly opposite is the West Room, seating a further 50 in theatre style, again with natural daylight and air conditioning, and is ideal for breakout sessions. The areas a linked by a large foyer which will serve for registration and refreshments.

Venue is charged at a daily rate, refreshments per delegate. Approximate budget for this venue would be ~£4000-4500

This table is an attempt to appraise the important factors in deciding on the host city, scored out of 5.

The committee has chosen Lincoln as the host city for the 2013 conference. There is no significant difference between the two shortlisted venues on most factors, and so the price was used to break the tie. Lincoln was chosen as the venue is significantly lower in price than the other shortlisted venue.