Please note that all copy should now be finalised (except page six). No more changes now unless factual or typos. Thank you. --Stevie Benton (talk) 15:29, 24 April 2012 (UTC)

This page is for comments, edits and feedback on the designed PDF of the 2012 Wikimedia UK Annual Report. The PDF is below. Please add in your views under the relevant sub heading for each printed page. Corrections and suggestions will be sent to the report's designer on Monday 16 April so we can get a second iteration of the designed report. Many thanks - and apologies if the formatting on wiki isn't perfect! Please do use the discussion page. --Stevie Benton (talk) 11:10, 12 April 2012 (UTC)

The latest version of the report has now been uploaded to the Wiki. From the list of amends below I've removed those that have already been made. Please review the report and note any amends. We're getting close to the point where the PDF needs to be with the printer now so if you'd like copy changes please note these in full if possible. I'm looking for changes to be noted by 10am, Monday 23 April. Thank you. --Stevie Benton (talk) 09:36, 20 April 2012 (UTC) 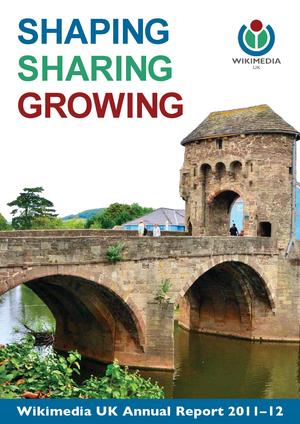 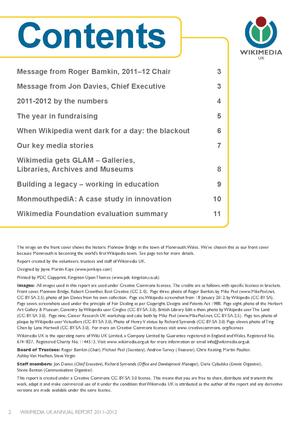 Suggestion: Change the colour of "Contents" from green to blue.

Add copy: The image on the front cover shows the historic Monnow Bridge in the town of Monmouth, Wales. We've chosen this as our front cover because Monmouth is becoming the world's first Wikipedia town. See page ten for more details. --Stevie Benton (talk) 15:17, 23 April 2012 (UTC) 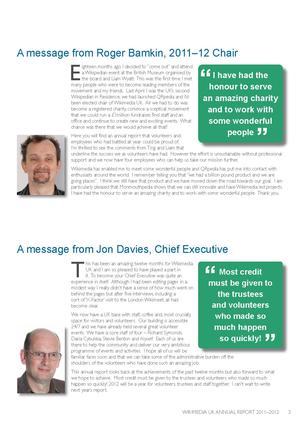 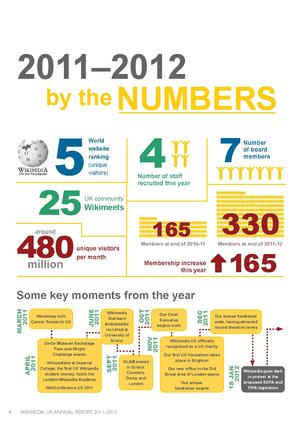 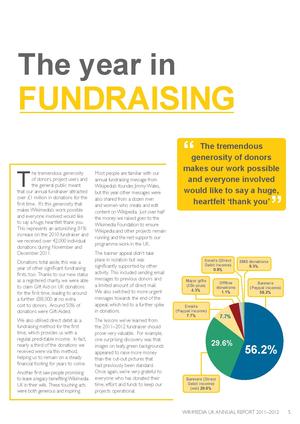 Fair point. I'm still learning the distinction myself! Think we should leave in the line about the leafy background if poss, it's the kind of little colourful detail that people love! --Stevie Benton (talk) 12:22, 16 April 2012 (UTC)

The plan is for this document to be an at-a-glance overview. The financial data will be properly covered in the SORP report to the Charity Commission. This one is for members, donors and the general public. --Stevie Benton (talk) 12:22, 16 April 2012 (UTC) 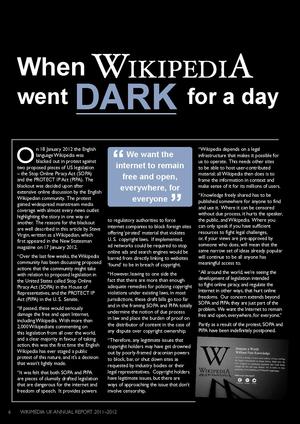 While white on black isn't the best combination on screen, it's much, much better printed. I think the impact it has is worthwhile as well, contrasting as it does with the rest of the document. So, basically what Martin said. --Stevie Benton (talk) 13:05, 16 April 2012 (UTC)

Agree with anon at 10:17. Do we have/need permission from the NS to quote so much from them? I suspect yes. Add second sentence like "The blackout was decided upon after extensive online discussion by the English Wikipedian community". And maybe more. 87.194.52.251 17:36, 24 April 2012 (UTC)

We should be absolutely fine to re-use that copy from the NS as it's already been recreated on our blog here. Will add in the line about the English Wikipedia community, thank you for that. When you say you agree with the anon user, do you mean about the white copy on black background? There are two posts from users times at 10:17. Honestly, the white on black honestly looks great when printed. But it can be changed if enough people think it needs it. --Stevie Benton (talk) 19:38, 24 April 2012 (UTC) 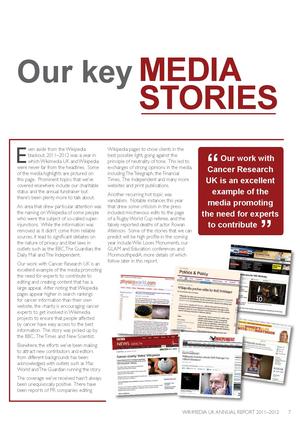 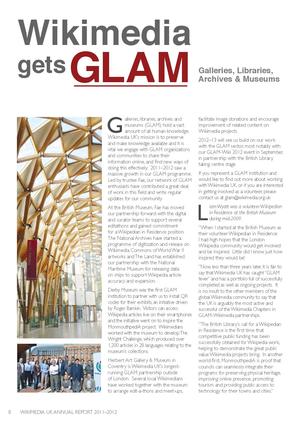 The way I'd approach it is by looking at everything on the events page that's GLAM activity, most events have an attendance list, if they don't then one of us will probably know a ballpark figure. Not sure I'll have time to do that tonight, do you have a chance to? The Land (talk) 18:04, 16 April 2012 (UTC)

I've looked again at Liam's text and I think the best way to shorten it is by chopping the final two paragraphs as they don't really say much that is significant. That said, there's a pleasing (near) symmetry when looking at pages 8 and 9 together... I'll try and cobble together a similar amount of text to add to the end of the first GLAM section. --Stevie Benton (talk) 10:31, 24 April 2012 (UTC)

Update to the above: Here's the changes I've sent to the designer:

Furthermore, these major projects have not distracted from running regular editing and behind-the-scenes tour events up and down the country which help develop Wikimedia community cohesion and build awareness of the GLAM sector, the Chapter and Wikimedia generally.

In the coming one-to-three year period I look forward to Wikimedia UK building on their solid foundation in a number of ways.

Add at the end of the first section (before Liam's text):

2012-13 will see us build on our work with the GLAM sector, most notably with our GLAM-Wiki 2012 event in September, in partnership with the British Library, taking centre stage.

If you represent a GLAM institution and would like to find out more about working with Wikimedia UK, or if you are interested in getting involved as a volunteer, please contact us at glam@wikimedia.org.uk 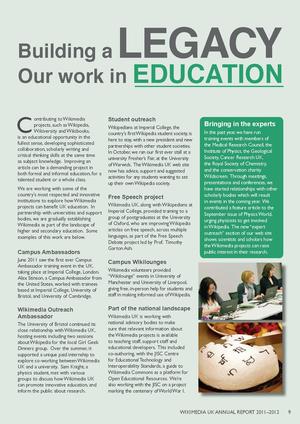 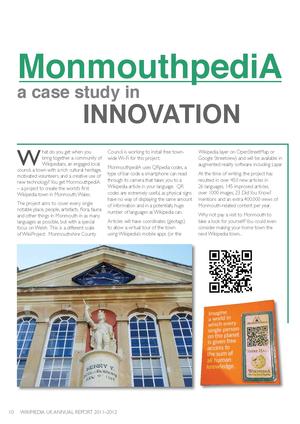 Draft copy on MonmouthpediA for the report below. Please do comment or edit as appropriate. --Stevie Benton (talk) 16:33, 20 April 2012 (UTC)

MonmouthpediA - a case study in innovation

What do you get when you bring together a community of Wikipedians, an engaged local council, a town with a rich cultural heritage, motivated volunteers, and a creative use of new technology? You get MonmouthpediA – a project to create the world's first Wikipedia town in Monmouth, Wales.

The project aims to cover every single notable place, people, artefacts, flora, fauna and other things in Monmouth in as many languages as possible, but with a special focus on Welsh. This is a different scale of WikiProject. Monmouthshire County Council is working to install free town-wide Wi-Fi for this project.

MonmouthpediA uses QRpedia codes, a type of bar code a smartphone can read through its camera that takes you to a Wikipedia article in your language. QR codes are extremely useful, as physical signs have no way of displaying the same amount of information and in a potentially huge number of languages as Wikipedia can.

Articles will have coordinates (geotags) to allow a virtual tour of the town using Wikipedia's mobile apps (or the Wikipedia layer on OpenStreetMap or Google Streetview) and will be available in augmented reality software including Layar.

At the time of writing, the project has resulted in over 300 new articles in 26 languages, 145 improved articles, over 1000 images, 23 Did You Know? mentions and an extra 400,000 views of Monmouth-related content per year.

Why not pay a visit to Monmouth to take a look for yourself? You could even consider making your home town the next Wikipedia town... --Stevie Benton (talk) 16:33, 20 April 2012 (UTC) 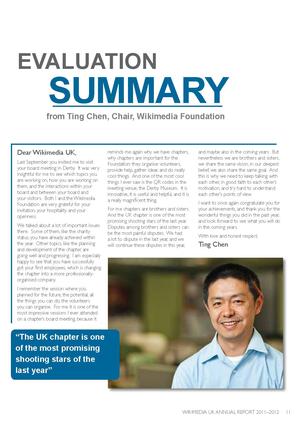 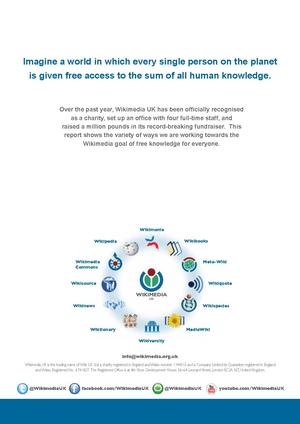