Below is the Wikimedia UK monthly report for the period 1 to 30 September 2011. If you want to keep up with the chapter's activities as they happen, please subscribe to our blog, join our mailing list, and/or follow us on Twitter. If you have any questions or comments, please drop us a line on this report's talk page. 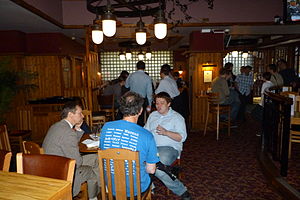 CEO candidates were in attendance at the 49th London meetup to chat with chapter stakeholders.

This month we completed our recruitment of our new Chief Exec: Jon Davies will start work on 1 October. Andrew Turvey, who led the recruitment, blogged about the process of recruiting our Chief Exec; one of the last steps in this process was the presence of the final three candidates at the 49th London Meetup so that the community could provide their input.

Our new full-time Office Administrator, Richard Symonds, known as Chase me ladies, I'm the Cavalry on Wikipedia, started work this month to assist specifically with the fundraiser work, and also more generally with WMUK's administrative needs. His contract runs until mid-January.

On the 1st September, Martin Poulter and User:Martinvl ran a workshop for members of the Institute of Physics. The event was written up in a blog post.

We funded two scholarships to attend WikiSym 2011 in October 2011. The scholarships were awarded to Dr Mark Graham, and Han-Teng Liao, both from the Oxford Internet Institute. Following from the visit, they will also present about their work at the Wikimedia Foundation offices.

Two ARKive project events were held in Bristol on 15 September (one in the afternoon, the other in the evening), led by Andy Mabbett (User:Pigsonthewing), details of which are at Wiki Wildlife Bristol. These were part of a larger collaboration to improve Wikipedia articles on threatened species, full information for which is available at Wikipedia:GLAM/ARKive. The events were covered by a number of local blogs and media organisations.

QRPedia saw extensive media coverage this month, mostly following from the WMF blog post about it. See below for links to the news stories.

A number of other GLAM activities also took place, including:

Press coverage of Wikimedia in UK publications this month included:

For events in November and onwards, please see Events.

We held an In-person executive board meeting on 18 September in Derby. Discussions focused on plans for our upcoming EGM (see below) and on the induction process for our new chief exec.

Draft reports from board members on their recent activities are available on the WMUK wiki in preparation for the next board meeting on 11 October.

Our application to be recognised as a charity by the UK's Charity Commission was significantly progressed this month. We will be holding an Extraordinary General Meeting on 16 October 2011 to pass a special resolution to change our Objects to bring them in line with the Charity Commission's view of what a charity is. See our blog post on this subject for more information.

In preparation for the upcoming fundraiser, we have run a series of fundraising tests this month. The tests and their outcomes are described on meta.

We received £3624.73 in paypal donations from 272 donors this month - more than twice what we received in August. We have also started accepting monthly and quarterly Direct Debits: this month we recieved eight new Direct Debit instructions, averaging £22/month. All but one of these came in during the hour-long fundraising test on 28 September.