Below is the Wikimedia UK monthly report for the period 1 to 31 May 2012. If you want to keep up with the chapter's activities as they happen, please subscribe to our blog, join our mailing list, and/or follow us on Twitter. If you have any questions or comments, please drop us a line on this report's talk page.

Our report this month includes a couple of major highlights. From a governance perspective the main highlight was our annual conference and AGM. This well attended event took place at the Science Museum, London. Activities at the AGM included the election of our new Board of Trustees, presentations on various themes related to our activities and the voting on resolutions.

The other main story was the launch of our Monmouthpedia project, which I'm sure you all know about. The numbers for this project were nothing if not staggering. Over 550 new articles, hundreds of improved articles, tens of languages, over 1,000 QRpedia codes in the town... The story received enormous, international press coverage – around 300 notable publications in almost 40 countries covered the story – not to mention blogs and social media. You can see links to these articles, and some photos and video footage from the day, below.

This report also contains information about our other activities over the month, including fundraising, communications, events and board activity. 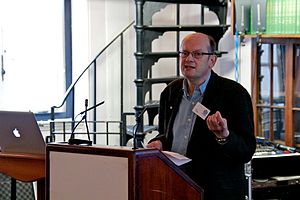 May 12th saw the 2nd annual "WikiConference UK", which was combined with the charity's AGM. The day was made up of talks and panels, and the elections of the new board of trustees. Presentations ranged wildly in subject from ideas for new tools, to copyright to outreach initiatives. The slides from the talks can be viewed on the conference agenda.

Wikimedia UK's AGM took place at the WikiConference. This included elections of the new Board (see #Board activities below), approval of past minutes, new resolutions. The resolutions approved at the meeting included changing the charity's official name from 'Wiki UK Ltd' to Wikimedia UK, to modify our Articles so that we can register as a charity in Scotland, to increase Board terms from one to two years, as well as standard motions to set membership fees, approve the accounts, and appoint auditors.

See also the This Month in GLAM UK report for this month. 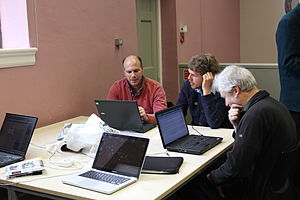 Below is an abridged list of coverage for the Monmouthpedia launch story so far. Given that there are 277 pieces of online coverage from 36 countries, the whole document has not been recreated on wiki. A full list in PDF form can be found here. Please also note that these are simply the most notable publications and the list doesn't include small scale blogs, tweets or Facebook comments.

Videos from the launch day

For events in July and onwards, please see Events.

There were several board meetings this month, surrounding the AGM on 12 May. On the 8 May, a brief telephone board meeting took place to note decisions made by email, and to run through any outstanding issues surrounding the AGM. On 12 May, a very brief board meeting was held to approve new members prior to the AGM. After the AGM, the new Board met for the first time to assign positions, approve resolutions for the change of signatories, and to discuss other transitional and urgent issues.

For information on Jon's activities this month, see News from the Office.

This month, we received £1,054.22 in one-off donations, with 49 individual donations. The average donation amount was £21.51. If anyone would like a full (but anonymised) csv file with more information, please get in touch with richard.symonds

wikimedia.org.uk and let him know your requirements.

May has been a busy month for comms within Wikimedia UK. The obvious main piece of work was garnering publicity for the celebration day of Monmouthpedia. Full details are available higher up in this report but the event was a success, widespread international coverage was achieved and many positive relationships were built with volunteers, local people, media, communications agencies and many other lovely people.

Another highlight was the publication of our 2012 Annual Report - Shaping, Sharing, Growing. High and low resolution versions can be found on this page.

A challenge this month was the publication of a somewhat controversial study released by the PRSA in the US. Responding to this in the UK media (especially seeking corrections where required) took quite a lot of time. It also served to highlight the need to improve relationships with the PR industry - which, luckily enough, was already under way. This will culminate in the publication of the CIPR's guidelines for PR best practice on Wikipedia, facilitated by WMUK and created with lots of input from Wikipedians.

The other major piece of work this month was the creation of a Wikimedia UK communications strategy. . It's currently with the board for approval. The document was formed with input from the community here. If you'd prefer to see an abridged version of the strategy which contains only the recommendations you can find one here.