From Wikimedia UK
< Training the Trainers
Jump to: navigation, search

This event is for volunteers who want to take a leading role in Wikimedia UK's training programme. You can express an interest in future events by contacting daria.cybulska

Where and when[edit | edit source]

The workshop took place on the weekend of 23-24 February 2013 in Manchester, and was run by a professional consultant. This session was based in North West England to target volunteers that are based towards the North of the country.

The timings of the event were: Saturday 9:30 am - 6:30pm, Sunday 9am - 5pm. Light breakfast and lunch were provided; we also had a social dinner after the training on Saturday. Travel and accommodation costs were covered.

The event was open to Wikimedia UK volunteers who can make a credible commitment to support training in future: it was considered a strong advantage to have already been involved in training events.

We know that some of our members are already delivering professional-quality training. They may think they don't need this weekend event, but it's especially important for them to sign up. This event was a chance to: 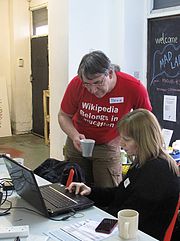 Doug training a participant in a November 2012 Girl Geeks event

Being a teacher who has also spent many years working with FE colleges and businesses to offer IT and related training, I already felt comfortable teaching people something new. I have always been keen for Wikimedia UK to offer formal training for editors to build a team of people who could help engage a new generation of editors, getting them past that important first edit. I attended the first event run by our professional training partners and it was highly enjoyable, both as a way to meet other people passionate about Wikipedia and share the benefits of our experience to learn something new. Since then I have attended around a dozen training events, and supported new editors and new trainers. I went to the Manchester Girl Geeks event in November 2012 and was able to offer support to two of our newer trainers who led the session, as well as the new editors. It's a great way to help the Wikimedia mission progress, and to get around the country meeting new people.

Attending Training the Trainers is a great way to spend a weekend. What I enjoyed the most was learning about the different learning style each of us have, how that affects the way we deliver training, and the effect it has on receptiveness of an audience. This has helped me immensely when planning for and running a training event, to ensure that everyone who attends can get the most out of what I'm doing. A secondary benefit is that it has also improved the way I learn. Last but certainly not least, you get to meet some great people during the event!

The course focuses on enabling the participants to develop and deliver high quality training which draws on their own skills and expertise. You can then apply these skills whenever you run a training session. Note that this is about training, not presenting, so we will not be focusing on developing content of presentations on e.g. Wikipedia.

By the end of the course the participants were able to:

As a part of the course participants also received an hour long 1-1 telephone feedback. This provided the opportunity to discuss performance and reactions to the course privately. It promoted intense reflection and rounded learning.

The participants were also able to:

This training represents an investment by Wikimedia in its future, so the choice of participants was made on the basis of how credibly each individual can commit to delivering future events.

Sorry it took me a while to decide but i have now decided against coming to this because it would be so difficult to travel to and from for me. Ironically i normally live in Manchester - in Scotland for uni, so any other time would have been perfect. keep me posted for more events like this and i'll try to make it to one eventually! Thanks.

See #Getting there below.

Holiday Inn for those that need it.

Quay Suite, in a classroom layout. Two flipcharts with pens, a screen, and a projector. Refreshments and free WiFi provided.

There is free parking and the hotel is near junction 3 of the M602.

Most train tickets to Manchester will say MANCHESTER CTLZ, this means they include travel between rail and tram stations in the Manchester central zone, which includes all stations mentioned below.

The walking route from Deansgate station (0.9 miles, 20 mins) takes you briefly North up Deansgate, then left down Liverpool Road past MOSI, right onto Water Street and left onto Princess Bridge across the Irwell into Salford, down the steps, across the A6042 and along Hampson Street (under the railway bridge) and continuing onto Middlewood Street and Liverpool Street until the Holiday Inn appears on the left.

Take the train to Salford Central station and follow the directions from there.

Take the train to Deansgate station and follow the directions from there.

Manchester Piccadilly is the largest station in Manchester, where many participants will arrive.

The easiest (and probably the quickest) option is to take the train from platform 14 to Deansgate station and follow the directions from there.

Back up alternative options include:

The train from Deansgate to Piccadilly on a Sunday is at a frequency of 2 per hour, at 11 and 51 minutes past the hour. Depending on timing, it may be quicker to get the Metrolink from Deansgate-Castlefield Metrolink station, which run every 15 minutes on a Sunday.

Deansgate-Castlefield Metrolink station is across the road from Deansgate railway station, follow the directions from there.

The Traveline Northwest journey planner should give you the best option.