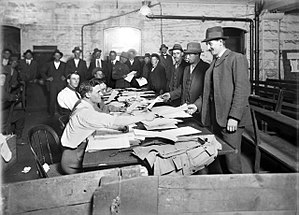 Wikimedia UK is working with both Wikimedians and institutions to help improve our coverage of World War I, in the lead up to the centenary in 2014.

The opportunities are immense. The Centenary will be a vital moment in the histories of many nations. There will be literally hundreds of thousands of journalists looking for background, students at all levels researching projects, and family historians finding out about their lost relatives - all using Wikipedia as an important source. At the same time, many institutions will be using the centenary as a focus for their own work and will be particularly keen to reach out to online volunteer communities like ourselves on topics like this.

This page is a place to help coordinate Wikimedia UK's work and thinking. Individual collaboration projects should be forked off to a page on the relevant project. We also hope to work closely with the English Wikipedia's Military History Wikiproject, and some relevant discussion may end up happening there.

Chris Keating gave a presentation on Wikimedia UK and the World War I centenary at the WikiConference UK 2012, the presentation can be found here.

Figures available here for all WWI articles with quality ratings and pageviews. Fascinating stuff (blog post coming) TO DO:

There will be a World War I Editathon on Saturday 16 June 2012, with a number of leading World War I experts attending! Please go to the editathon page for more details.

Yes. Yes it does.