This project lead to the appointment of a permanent Wikimedia at NLW. For details click here

As of the 19th of January 2015, Wikimedia UK and the National Library of Wales are jointly supporting a project to develop further open licenced resources, digital files and other forms of information, opening up access to information kept at the Library. The appointment of a Wikipedian in Residence will help focus this work and also facilitate a program of Editathons and staff workshops. This project overlaps the cultural partnerships and expert outreach areas of Wikimedia UK's work. This page is intended as a site for discussion, and to provide information on ongoing and future projects organised as part of the collaboration between the NLW and Wikimedia. If you are interested in getting involved in Wikimedia events organised at the NLW, or in contributing to a Wikimedia community in Wales, you are welcome to contact the Wikimedian-in-Residence, Jason Evans 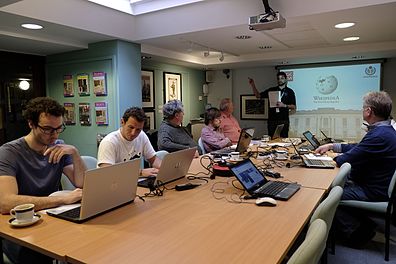 Welsh Photographers edit-a-thon at The National Library of Wales

The residency will run for one year with the goal of building lasting bridges between The National Library and Wikipedia. The Wikipedian in Residence will work closely with Library staff to facilitate the release of digital collections on free licences for use on Wikipedia, and will advocate Open Access to digital collections. Working closely with other cultural partners in Wales the aim is to encourage and facilitate increased open access across the sector by affecting policy change. There will also be a focus on improving Wikipedia content by holding a series of Edit-a-thons on a variety of subjects, to mentor and encourage new Wikipedia editors. A series of workshops on using and editing Wikipedia will also be offered to all staff and the National Library.

By supporting and participating in the development of such a high profile resource, this enterprise will contribute towards the NLW's aim of providing ‘Information for All’ and in turn will draw people back to the services and collections of the Library.

As the Residency progresses, a log of projects or events being organised, contributions currently in progress, and contributions that have been identified for the future will be updated here.

In January 2017, With a Grant from the the Welsh Language department of the Welsh Government, the National Library and WMUK embarked on a three month project to improve Welsh language Wicipedia content about Pop music and popular culture. The project will consist of a series of events, content and data sharing partnerships and experimentation in automatically creating articles by using data. You can follow developments on the Wicipedia Wicipop Project page. Here are some other useful links.

All NLW uploads to Wikimedia Commons can be found here

In April 2016 the National Library became the first institution in the world to host a Wikidata Visiting Scholar. You can follow the volunteer's progress here

Throughout the Residency, all monthly reports submitted to the NLW and Wikimedia UK will be posted here to allow those interested to track its progress.

Following the discovery of a previously unknown version of the Welsh National Anthem whilst preparing resources for the Patagonia Edit-a-thon, the discovery, the event and my residency in general, were the subjects of significant media coverage.

The Wikipedian in Residence[edit | edit source]

A Wikimedian (or Wikipedian) in Residence (WiR) is a Wikimedian who dedicates time to working in-house at an organization. The role is fundamentally about enabling the host organisation and its members to continue a productive relationship with the encyclopaedia and its community after the Residency is finished. The aim is to promote understanding of Wikimedia projects amongst National Library of Wales staff, as well as GLAM organisations in Wales more generally, by organising workshops and events. WiRs also work with staff to digitize, compile, and organise resources that can be shared with the Wikimedia community.