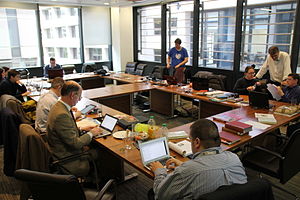 This event came about after one of the regulars at the Coventry meetup (who is also a trustee of the Burgon Society) approached Rock drum and myself. It was planned to be similar in structure to the Coventry History Editathon held at the Herbert Art Gallery and Museum in March 2012. The society's chairman very kindly arranged for us to use the facilities at Deloitte for the event. Approximately 14 people were present, divided almost equally between newbies and those with some previous editing experience.

The first hour or so was given over to general discussion and thumbing through Welcome to Wikipedia booklets as we were unable to access Deloitte's WiFi. As it became clear that the WiFi would not be available in time for a productive editathon, those with smartphones enabled them as mobile hotspots, and between three smartphones there was sufficient capacity for everybody to connect. With Internet access established, we began in earnest by discussing articles that attendees wished to work on and showing several of these on a projector. Most attendees were keen to work on articles related to the academic dress at particular institutions, often those they had attended, and the articles for academic dress at the universities of, inter alia, Newcastle, Durham, Westminster, Exeter, and Warwick were mentioned. After a comparison and discussion of several articles, we demonstrated some basic edits and discussed encyclopaedic writing and attendees were encouraged to find an article to work on with an experienced Wikipedian in the afternoon session.

After lunch, we set about editing. The attendees worked individually or in groups of two or three, in each case assisted by a more experienced Wikipedian, to improve articles using resources provided or that they had accessed online. One group was assisted by Toni and Nicholas, who tidied the article while the others continued to work on it. Improvements were made to:

Several attendees said they were inspired to continue working on articles after the event and that they felt the event made the prospect of editing less daunting. I distributed my contact details and invited attendees to get in touch with any questions, and I will encourage at least one attendee who lives near an existing meetup to come to the next one. Discussion of similar events in the future has already begun in principle.

The sole recommendation of this report for Wikimedia UK would be that the charity purchase a "MiFi" device or similar for future events where WiFi may be problematic. Harry Mitchell | Penny for your thoughts? 20:24, 28 May 2013 (UTC)

Excellent stuff Harry and Rockdrum and Nicholas. Any idea of the gender split as we try and collect numbers.gender.newbies etc for our stats Jon Davies (WMUK) (talk) 08:10, 29 May 2013 (UTC)

I think it's slightly demeaning unfair that the focus is on "how many women did we get" rather than on "at least half a dozen people who are experts in their field now feel able to contribute to Wikipedia". We had one woman, whom I believe was new both to us and to the Burgon Society.

To answer a question Richard N asked in an email about structure: I had planned to get some editing done before lunch, but the faff with the WiFi meant we got down to business later than hoped. In the event, we spent a little over an hour (plus the first hour of informal discussions while we waited for news on the WiFi) discussing general principles and doing demonstrations. The after-lunch session was almost entirely given over to editing. Essentially people picked an institution to work on (some on their own, some in twos or threes) and were given a mentor. RD took some photos (Commons:Category:Burgon Society editathon) so you can see what the room looked like. File:Burgon Society editathon 1.JPG and File:Burgon Society editathon 7.JPG are my favourites (though my hands seem to be suspended in mid-air in the latter!). Harry Mitchell | Penny for your thoughts? 14:32, 29 May 2013 (UTC)

It's good to hear that you were able to adapt your approach given the problems with wifi.
However, it's not fair to characterise Jon's question as demeaning. There is a range of things we need to know about our events, including how many men and women attend. It's not the bottom line or the only measure of success, but it is something we want to keep an eye on considering the gender gap on Wikipedia. You highlighted the improvement of articles, which is fantastic, but it's not all that we want to know. For instance, further down the line it would be great to know how many people who took part in the editathon are still editing. Richard Nevell (WMUK) (talk) 15:08, 29 May 2013 (UTC)

On the day we had seven members of the society present - six men and one woman, two of whom hadn't been to a society event before. (Another member couldn't make it on the day but joined us briefly by skype and planned to do some editing at home; also a ninth member turned up for a short while to say hello.) I think I'm the only one of those seven who's done much editing before, but all of the others seemed to quite take to the idea, so hopefully at least a few of them will continue doing so. The gender split wasn't as balanced as it could have been, although it was more or less representative of the membership of the society as a whole. -- Nicholas Jackson (talk) 22:21, 29 May 2013 (UTC)

Thanks to all of you who helped make this event happen - I think it was a very positive and inspiring day. We've had some nice feedback from the people who were there, with more than one person saying in particular that they hadn't quite known what to expect but found it very informative and worthwhile. We've also recently been talking about how best to make our various publications and research available (in line with our charitable aims) and this has given us some useful ideas. I also think we'd be interested in doing a follow-up event of some sort in the future (hopefully with a few more of our members attending). -- Nicholas Jackson (talk) 22:21, 29 May 2013 (UTC)

Yes heard about the WIFi issues - major headache. Well done for the work around. Wasn't meaning to be demeaning by asking about the metrics :| not even slightly. The metrics thing is something by which we are judged by our donors and community and quite rightly, and two of the targets we have as a movement are to increase reach and increase participation with a specific emphasis on gender balance. So if anyone asks we can say 'Yes! The Academic Dress event was a success for all the following reasons...'. I still don't regret not going to my graduation. Black just doesn't go with my complexion. Jon Davies (WMUK) (talk) 11:58, 30 May 2013 (UTC)

On reflection, demeaning is a little harsh and I'm sure it wasn't your intention. I do think it's possible to focus on a particular issue at the expense of all others, and that way we end up snatching defeat from the jaws of victory. The event was put on for the Burgon Society and they promoted it, so I'm not sure how useful the demographics are in measuring WMUK's reach. Harry Mitchell | Penny for your thoughts? 16:00, 30 May 2013 (UTC)

A write up available here.