Below is the Wikimedia UK monthly report for the period 1 to 31 July 2011. If you want to keep up with the chapter's activities as they happen, please subscribe to our blog, join our mailing list, and/or follow us on Twitter. If you have any queries, please ask them to us on this report's talk page.

The executive board (chair, secretary and treasurer) met in-person on 9 July, followed up by a meeting by telephone on 19 July. The agenda is on the WMUK wiki, as are the minutes. The main part of the meeting was to clear the backlog of expense claims and postal letters sent to the chapter, which was successful.

On 25 July the full board met by telephone - again, the agenda is on the WMUK wiki, as are reports from individual board members and the meeting minutes. Most of the discussion was about individual board member activities (including GLAM, education and other activities), with specific discussions about our application for charity status, recruitment of our Chief Executive, our education activities, conflict of interest policies and plans for the 2012 financial year. 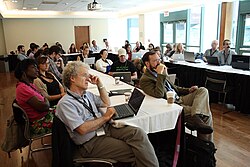 Attendees of the Wikipedia in Higher Education Summit, watching a presentation.

On 4 July, Sam Knight (wikipedia:User:Wikisamia) started a joint WMUK-University of Bristol summer student placement, aiming to build on Wikimedia UK's existing relationships with the city to create partnerships that benefit both Wikipedia and the community.

On 7-9 July, Wikimedia UK director Martin Poulter, and wikipedia:User:Chzz attended the Wikipedia in Higher Education Summit. This was a three-day conference held at Simmons College in Boston, Masachusetts.

Monthly fundraising reports are publicly available on our Finances webpage. Here are summaries of each month thus far this year:

Our accounts from incorporation until 31 January 2010 have been completed, and were approved by our members at our AGM in April (you can read them online). Our accounts for 1 February 2010 to 31 January 2011 been audited, and are in the process of being reviewed and signed; we will make them available online shortly.

In July we renewed our Fundraising Agreement with the Wikimedia Foundation; the agreement can be found on the WMUK wiki at 2011 Fundraiser/Agreement. We also began participating in the pre-testing for the Wikipedia Annual Fundraiser, as documented here. We are also close to signing an arrangement with a Direct Debit bureau to enable us to take Direct Debit payments in this Autumn's fundraiser.

A revised submission has now been sent to the Charities Commission; we expect their reply by mid-August.

Coffee and badges at the "Comunicating the Museum" conference.

Between 6 and 8 July, wikipedia:User:Johnbod joined the Wikilounge team at the "Communicating the Museum" conference in Düsseldorf, Germany. Several contacts were made, and a meeting with Historic Royal Palaces is now arranged.

On 11-12 July, Oliver Keyes and Tom Morris ran a Wikipedia/Wikimedia UK stand at the CILIP conference, Hatfield. A public report is available.

The 16th July saw a Wikilounge at the Victoria and Albert Museum, London, which focused on the article on Tipu's Tiger as a multilingual case study and improvement effort. The V&A released its official photographs of the automaton under a free license so that they could be used on Wikipedia, and the English article was dramatically improved as a result of the event, and is now available in over a dozen different languages.

On the 11th July, Andy Mabbett (wikipedia:User:Pigsonthewing) started a ten-week 'Wikipedian-in-Residence' style project as Wikipedia Outreach Ambassador to wikipedia:ARKive. ARKive have donated the text of 200 of their articles on endangered species, under a CC-BY-SA 3.0 licence. These texts are now being incorporated into the corresponding Wikipedia articles and further developed on-wiki. Full information is available at ARKive project and wikipedia:Wikipedia:GLAM/ARKive.

The 28th July saw the start of a project with the National Maritime Museum to improve Wikipedia's coverage of Royal Navy warship histories - the NMM released information about around 20,000 warships under a free license, and this information is now being integrated into the corresponding Wikipedia articles.

For additional information on our recent GLAM activities, see the UK report in the global 'This Month in GLAM' report.

This month, we put out job adverts for our first Chief Executive, as well as a temporary Office Administrator. Both positions received a large number of applications, with interviews due to take place in August.

We forgot to mention last month that Andy Mabbett, aka User:pigsonthewing, was interviewed on BBC Radio West Midlands on 12 June, talking about Wikipedia editing. While he was on-air, he took a picture of his interviewer, which was uploaded to Wikipedia before the show ended - see Andy's blog post for more information and a link to the audio recording.

Several Wikipedia Workshops took place at the start of this month, with the Medical Research Council Workshop taking place on 1 July, and the second Bristol Wiki Academy taking place on 4 July. The latter event was blogged about on the WMUK blog, and was also reported on by the Bristol Wireless and Media Quest Mood blog.

For events in September and onwards, please see Events.